Steinbacher geese were developed from both eastern and western varieties of geese in the early 20th century in the German state of Thuringia, where they are known as Steinbacher Kampfgänse (Steinbacher Fighting Goose). The breed’s origin is not well documented, but many sources point to a cross between Asiatic Chinese and various local German geese. A cross with the Russian Tula – the Russian fighting goose that arrived in Germany right before the Second World War – is also possible. The Tula was a cross of the European Greylag and eastern birds that were developed from the Swan goose. It is interesting to note that crosses of domestic Greylags and modern Chinese geese often produce offspring that look like the Steinbacher. No matter their origin, the Steinbacher is a blend of eastern and western geese and is a truly unique breed.

The Steinbacher was admitted to the German Poultry Standards in 1932 and the British Domestic Waterfowl Standards in 1997. They were first imported to the United States from Germany in 2004 by Mr. and Mrs. Krebs of Steinbacher Poultry Farm in Michigan. They are a conservation priority for The Livestock Conservancy, despite being a relatively recent import, because they are globally endangered. The blue variety was accepted to the American Poultry Association Standard of Perfection in 2011. 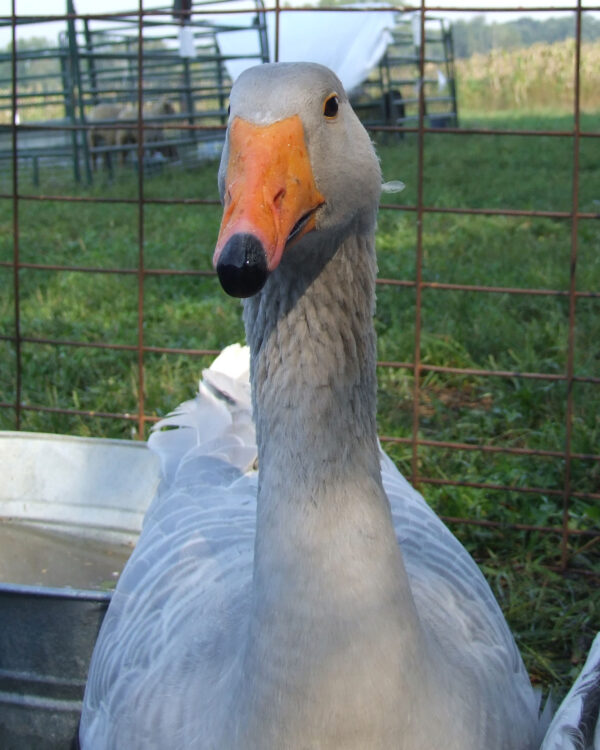 Steinbacher geese are often described as “confident.” They are an upright breed without keel or dewlap. They have a distinctive orange bill with a black bean at the end, black “lipstick” lining the bill edges, and an orange ring around the eyes. The goslings hatch with pure black bills, legs, and feet and change to the desired color as they mature. In Germany, these geese are found in grey, blue, buff, and cream. The American Poultry Association only recognizes the blue color variety. Unusual in blue poultry breeds, Steinbacher geese breed true. According to American Waterfowl Judge Lou Horton, “In terms of weight ranges, the German Standard calls for old birds to be in the 15-17 lbs. range while the British Standard specifies weights from 13-16 lbs.” The American Poultry Association standard calls for mature ganders to weigh 13-15 lbs. and mature geese to weigh 11-13 lbs.

A paunch develops in the females after they first lay and is single-lobed. Once formed, it never diminishes. “There is some [international] controversy over the most desirable paunch for the Steinbacher. It is generally agreed that in young birds, there be little sign of a paunch. In older birds or females after they have layed the German Standard specifies a single-lobed paunch, while the British Standard calls for a double-lobed paunch. Since the breed originated in Germany, I would think that a single-lobed paunch in older birds would reflect what the original foundation stock possessed.”  American Waterfowl Judge, Mr. Lou Horton

Steinbacher geese can lay 30-50 large, white eggs annually, though lay rates vary widely among strains. They retain good mothering instincts. Some can be reluctant sitters, but they are able to sit and hatch their own eggs. They make good parents. There are some reports of these geese having a short breeding life – just a little over 6 years.

They’ve been advertised as monogamous, but many breeders report otherwise. Some breeders have found that these geese do better in pairs and have not had good success with trios.

Additionally, they have been advertised as needing a special diet, but many breeders also disagree. They graze to obtain most of their food and overfeeding can be bad for their health.

They’re very popular with the public at shows due to their attractive color and outgoing personality with people. There is often a crowd of people gathered around their cages. While originally developed as a fighting breed, most have calm dispositions toward humans and other geese except during mating season when males should be separated to avoid confrontations. Birds who have been around people from the time they are young are especially tame.

They are a hardy breed and would make a good addition to any size farm. Because of their low numbers, conservation efforts would help Steinbacher geese as they are still rare in the US.