Use:
Meat , Some Dairy, Some cashmere

Beginning in the 1500s, the Spanish brought goats from Spain to the Caribbean Islands, then to the areas that would become the United States and Mexico. These foundation stocks were an undifferentiated Mediterranean type of goat that was once common in Spain but no longer exists, thus adding genetic and historic importance to the Spanish goat breeds that evolved in the western hemisphere.

Goats flourished in the Americas. Valued as a ready source of milk, meat, and hides, they were taken everywhere the Spanish went and became an integral part of subsistence production across southern North, Central, and South America. The use of goats for meat was also important because it allowed cattle to be reserved for the draft power essential for crop production and transportation. Spanish goats were the only goats known across the southern US and in most other parts of the Americas for over 300 years. 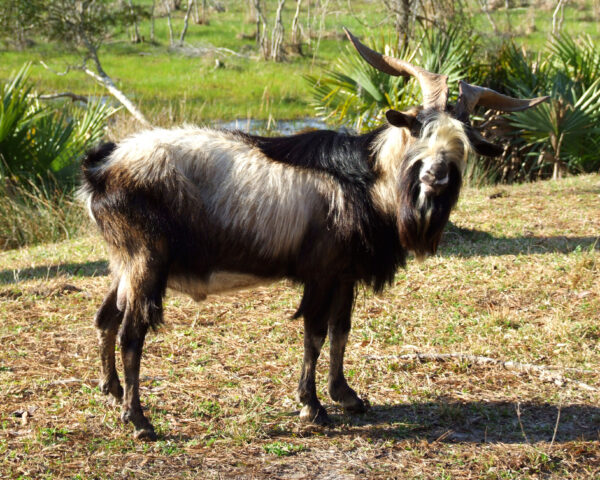 There were many regional types and strains, both domestic and feral, shaped by natural selection and geographic isolation. This changed with the importation of goat breeds from other countries that began in the second half of the 1800s. A majority of the Spanish goats in the US were crossed with these imported breeds for dairy production or were replaced by Angora goats for the production of fiber. Today, there are relatively few purebred Spanish goats in the US.

The breed has secured a production niche in Texas, and the largest number of Spanish goat herds are found there. However, even in Texas has been common for Spanish goats to be crossbred for meat production, especially with the Boer meat breed from South Africa. This cross shows superb hybrid vigor, but the overuse of crossbreeding threatens the survival of pure Spanish populations. Pure Spanish goats are also being crossbred to produce cashmere, a useful application but one that also removes animals from the purebred breeding population.

Overall interest in Spanish goats has been increasing due to the growth of the goat meat industry and with increased recognition of the breed’s production qualities. Spanish goats are hardy and rugged, thriving on rough forage and in inhospitable environments, and does are also known to be long-lived and prolific.

One obstacle to the promotion of these goats is that the term “Spanish goats” has also been used to describe the crossbred and nondescript goats of the Southwest, and in the Southeast, Spanish goats have been known as brush, woods, and scrub goats; these terms may include both purebred and crossbred animals.

As a result, many people do not see the Spanish goat as a pure breed – an easy mistake to make given the indiscriminate use of the term “Spanish” and the physical variability within the population. Fieldwork in the US has been helpful in identifying the various strains of Spanish goats and in encouraging the development of a formal network of breeders. The Spanish goats of the Southeast have been found to be specifically adapted to hot, humid conditions, something lacking in some of the Texas strains.

The Spanish goat is a landrace and varies in appearance. They range in weight from 50-200 lbs. with the largest animals representing strains that have been selected over many decades for meat production. They are often somewhat rangy and large-framed instead of compact and cobby. Some lines of the rangy variety are well-filled with good depth of body and exceptional meat-production conformation. Their feet are strong, and they have strong, upright pasterns; legs are usually straight when viewed from the front and rear, though there may be slight “cow hocks” in some animals.

Spanish goats are usually horned, and the horns on bucks may be large and twisted. The ears are large, and they are held horizontally and forward next to the head. Though the ears may be long like those of Nubians, the ear carriage is distinct, and the straight or concave face is quite different from that of the Nubian breed. Their coats are usually smooth and short, although some have longer hair on the lower body and thighs. Some produce heavy cashmere coats, with 2-3 oz. of fiber. Spanish goats can be any color that is found in goats, and color variation, even in single herds, can be dazzling.

Spanish goat does can be excellent mothers and good producers. Like many other meat goat breeds are polyestrous, so can be bred throughout the year. In cooler climates, the goats will need a shelter free from drafts.

The breed is good for hands-off farming and is hardy, outstanding for clearing brush and foraging as well as a good meat breed. When looking for Spanish goats to purchase, you will want to find breeders who are raising the goats in the manner you plan to use for a smoother transition from their farm to yours. Also consider whether the breeder is selecting for more sociable animals, if you want them, as Spanish goats are often not especially sociable with humans. Although the breed is known for its parasite resistance, they will still need to be monitored.

One of the biggest issues Spanish goat breeders have is predation, which may include both animals and birds that especially prey on young goat kids.

The Spanish goat is a global genetic resource that is unique to the US. The breed’s estimated population may be as large as 8,000, but the challenges to its survival are imposing. For these reasons, the Spanish goat is a conservation priority for The Livestock Conservancy.