The White-Faced Black Spanish chicken can be described as the aristocrat of the poultry world. The chicks can be rather flighty, as can all Mediterranean breeds, but the adults hold themselves like a Spanish Don – head up, one foot forward, and a calm demeanor. No other breed of chicken can embody the word “aristocrat” in its posture as well as the Spanish chicken. 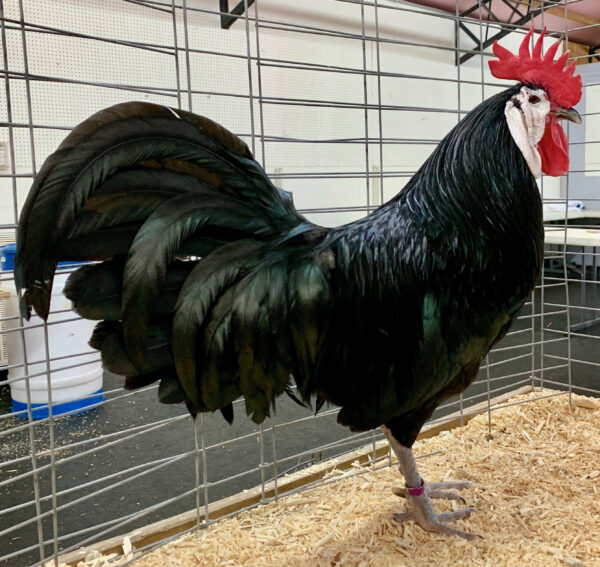 Spanish chickens are of an ancient, unknown lineage, but may have been developed in Holland in the 18th century, or even earlier from old Castilian stock. They were known in England in the late 18th century. The breed came to America from Holland and, from 1825 to about 1895, was one of the best-known poultry breeds. During the early 1860s, Spanish chickens were popular in New Jersey, Pennsylvania, and as far west as Ohio. Farmers who specialized in market eggs kept large flocks of this breed as late as 1895.They were exhibited at the first poultry shows in both America and England. In England, it was the first breed for which classes were maintained at all the poultry shows. In America, the breed was exhibited as early as 1854 at the New York State Poultry Society show by J.P. Childs of Woonsocket, RI.

Until about 1895 the White-Faced Black Spanish was one of the best known improved breeds. The downfall of the Spanish chicken began with a combination of two attributes: the breed’s delicacy and its white face. As the older strains with moderate white faces were displaced as a popular laying breed by the Minorca and Leghorn, show fanciers began to compete to produce the largest white face. And as breeders paid more attention to increasing the size of the white faces in the Spanish chickens, a great loss of hardiness was observed. This combined with the delicate nature of the chicks soon led to a loss of popularity to hardier breeds.

Spanish chickens were admitted to the American Poultry Association Standard of Perfection under the name of White-Faced Black Spanish in 1874.

In plumage, the Spanish chicken is a lustrous greenish-black with tight-fitting feathers and moderately flowing tails. What sets them apart from other breeds are the tremendous white ear lobes and white on their faces which resemble something the artist Salvador Dali might have painted, as their faces appear melted and extend downward. But this breed predates Dali, so their appearance would be more likely to have influenced his art. They are a non-sitting fowl with dark brown eyes, dark slate shanks and toes, and, of course, their large white earlobes and faces. Males have large, upright combs; females’ combs are large but flop over, and care needs to be taken to avoid frostbite in cold climates. Males weigh 8 lbs. and females weigh 6.5 lbs.

They are not a cuddly breed, but prefer to roam, and, although they can be confined, they would not be happy about it. They are not an aggressive breed, and would be aloof in a flock situation with other breeds. They are vocal. They are also a more fragile breed health-wise because of the breeding that was done specifically to produce the large white earlobes and faces. They need care in both heat and cold. This is a breed that needs stewards who can appreciate these unique-looking birds and their egg-laying capability, and select birds that balance both appearance and hardiness.