The Southdown is historically one of the most important of the British breeds of sheep, valued for fleece, meat, and for improvement of other breeds. The Southdown was developed in southeastern England, specifically in the Chalk Hills or “South Downs” of Sussex. The region has a mild climate, fertile soil, and good grass that make it excellent for raising sheep. 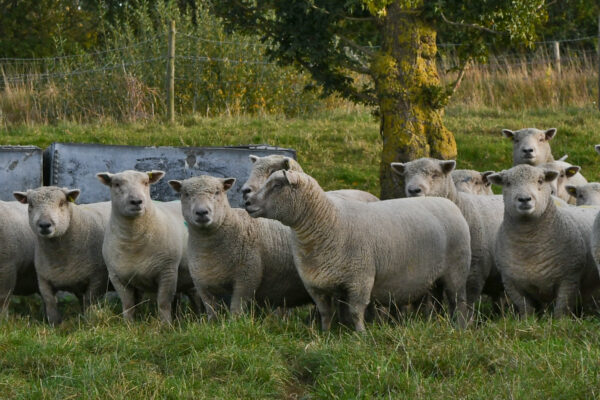 The Southdown breed is the oldest of the “down” sheep. It originated from the native sheep of the region, which were improved beginning in the late 1700s and continuing through the 1830s. Southdown sheep were known as hardy and quick growing, and the quality of their meat was celebrated. The breed was consistent in qualities, and it was used in the development of several other breeds, including the Shropshire, Hampshire, and Oxford; in this way its role was similar to that of the Leicester among the longwool breeds. The Southdown Sheep Society was formed in 1890.

The sheep are white with mouse colored faces. They have wool on their faces, ears, and legs. Both ewes and rams are polled. The wool is fine to medium, with a staple length of 4-6 cm, average fleece weighs 3-5 pounds, and a fiber diameter of 23-29 microns. The breed has been shaped by selection for meat production, and as a result, Southdowns are early maturing and forage efficient. The high quality of the carcass has also been a hallmark of the breed. Southdowns are active sheep but they are calm in disposition.

The Southdown was probably imported to North America in the 1700s, though the first documented importation occurred in 1803, with sheep brought into New York and Massachusetts. Importations continued throughout the 1800s, though the breed did not become popular until after mid-century with the subsiding of the Merino craze. The American Southdown Breeders Association was formed in 1882. The breed was highly regarded as a premier meat breed until the market shift to taller, larger sheep during the 1900s. Today, it is about the 6th or 7th most popular breed in the United States, and its population has held steady during the past 20 years with over 5,000 lambs registered per year.