The British Soay is an ancient, short-tailed breed of sheep that descend from a feral population on the island of Soay (Norse for Sheep Island – indicating a connection to the Vikings), in the St. Kilda archipelago of Scotland’s Outer Hebrides. While the primary population remains on the islands, some of the sheep were brought onto the U.K. mainland, and there were later exports to Europe and North America. The population on the islands fluctuates between about 800 to 2000 sheep, and the population is now closed to emigration or immigration. 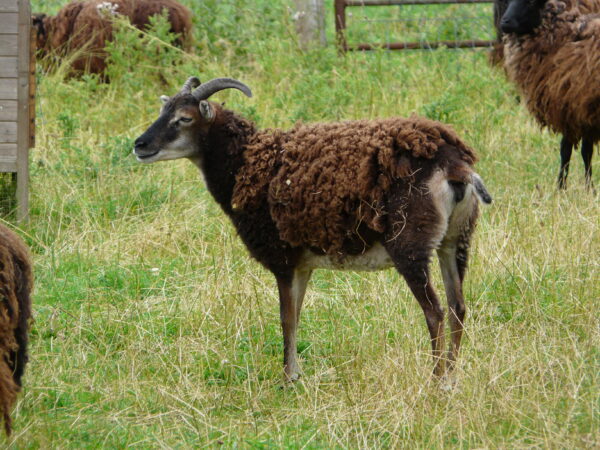 Soay sheep are small (50-80 lbs), nimble and almost deerlike sheep, with slender bones and clean faces and legs. Their small stature belies the breed’s hardiness, resilience and self-sufficiency. Isolated on Soay for thousands of years, the breed was shaped by the harsh North Atlantic environment into a cold-hardy, parasite and disease resistant, resilient sheep. Ewes can lamb easily for up to 10 years and they are good mothers. The breed can thrive on marginal pasture that would be inadequate for other sheep breeds, but they can become overweight quickly on lush grass or grain.

Soay wool is cast (shed) in the springtime and can be rooed by hand. Fiber quality varies from wooly to kempy with colors ranging from light brown to near black. Soay also produce a mild-tasting, low-fat meat. With their docile nature, small size and lighter impact on the soil, they are useful for ecologically-sound grazing programs, and could be especially useful in solar farm or vineyard grazing situations.