Silver Marten’s origins date back to 1921 in the United States where the rabbit first appeared. At the time, Chinchilla rabbit breeders introduced black Tan rabbit genetics into the gene pool to improve the Chinchilla’s fur. The result was that on occasion, a color mutation, also known as a “sport,” would appear in some of Chinchilla litters. The breeders at the time referred to them as the “strange little black rabbits.” The animals had a black top color with white under the chin and belly, under the tail, inside the ears, in the nostrils, and in delicately rimmed eye circles. Silver ticking also adorned their amazingly glossy coat in the bottom section of the black area along the bottom of the side of the belly. This color combination was known as “silver marten” in reference to the mink-like wild marten that has a similar color pattern on its coat. 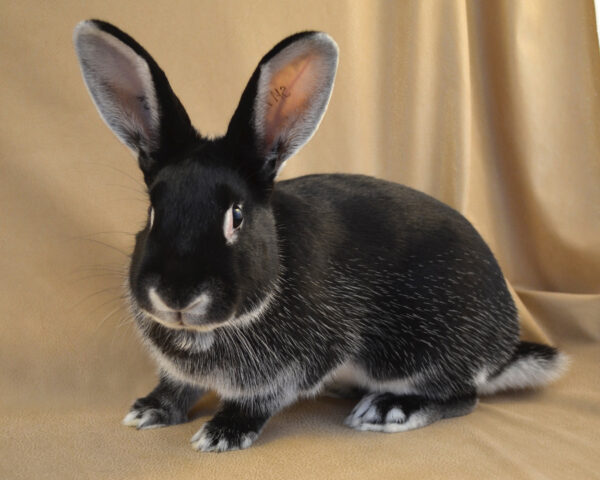 When crossed, Silver marten sports bred true and produced offspring that looked like their parents and not like their Chinchilla grandparents. These animals became the foundation of what we know as the Silver Marten breed, a strikingly beautiful rabbit named for its unique color pattern. Not long after its creation, the Silver Marten Rabbit Club was formed by enthusiasts of these rabbits by 1927. Silver Martens are known to be gentle rabbits reaching a maximum weight of 9.5 pounds. The breed has endured but is rare. These rabbits have been used to introduce their unique color to other breeds such as the Mini Rex and Netherland Dwarf. Other color varieties of Silver Marten have been accepted into the breed standard including the Chocolate, Blue, and Sable Silver Marten.