Notes:
Dual purpose breed that can also be considered for milk production

The Shropshire is a member of the Downs family of sheep and one of the few blackfaced sheep on the Conservation Priority List. 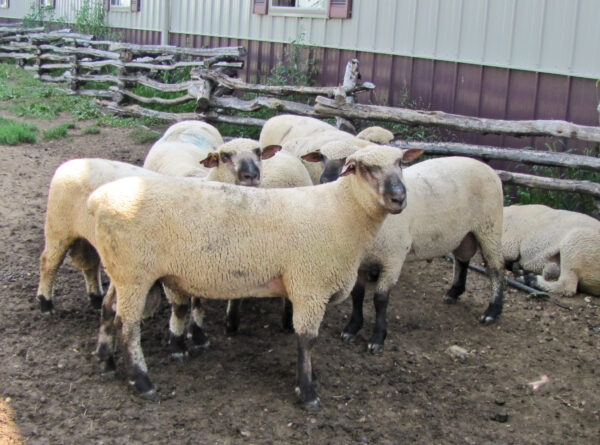 This breed came from the Shropshire Downs of England. Black-faced sheep were described in this region as far back as 1341. In 1792, the Royal Agricultural society reported about 10,000 native Morse Common sheep in this area. These were were small, horned sheep described as “the pride and boast of Shropshire”, having black, brown, or spotted faces and a superior quality of wool. Other breeds were crossed to these native sheep to develop the Shropshire breed. Some sources state influences from Southdown, and possibly Cotswold & Leicester to improve the native sheep. The breed did not receive the name of Shropshire until 1848. Shortly thereafter in 1855, the first American importation was made into Virginia. Because of the quality of these sheep, there followed frequent and sometimes large importations over the next thirty years. The American Record Association, now the American Shropshire Registry, was founded in 1884.

Until the 1930s, Shropshires were a very popular and influential breed in the United States, especially in the northern tier states. In the 1930’s, the breed is described as having excellent fleece, good fleshing, and great prolificacy, but only medium-good constitution. The breed standard called for wool covering the head, shanks, and hind legs down to the toes and for heavy facial wool. By the late 1930’s, wool blinding was a recognized factor and breeders began to select for taller, open-faced sheep. Imports of additional Shropshires from England accelerated this selection in the 1950s and 60s.

The modern Shropshire is a useful and productive dual-purpose breed. Shropshires are medium sized sheep, with an average size for ewes of about 150-180 pounds and rams 225-250 pounds. They are feed efficient, easy keepers, and gain well. A prolific breed, they are known for easy lambing. Shropshires are a good choice for youth projects due to their gentle disposition. Shropshire wool has a fiber diameter of 24.5-33 microns and a staple length from 2.5 to 4 inches (6-10 cm). Like all the downs sheep, this medium-grade wool has a springy quality that makes it perfect for hardwearing items such as hats, mittens and socks.

Notes:
Dual purpose breed that can also be considered for milk production