Shire horses get their name from the rural “shires,” or counties, in England, where it was traditionally used for agriculture, heavy hauling, and war. The breed descends from the “Great Horse” of medieval England, a large, strong mount that could carry a knight and armor weighing up to 400 pounds with swiftness and agility. These native English horses were crossed with Flemish stallions in the 1200s and Dutch Friesians in the 1500s. From then on, the region of Lincolnshire was home to a distinctively large, black horse called the Lincolnshire Black or Heavy Black. 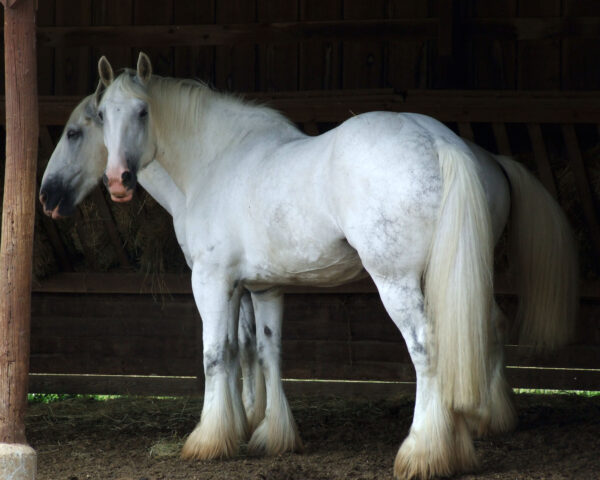 Large horses were used for long-distance hauling and heavy transport over rough country roads and uneven cobblestone streets of cities. The Heavy Black gradually spread across England in the 1700s. The Modern Shire was established around 1790 based on work done by pioneering livestock breeder Robert Bakewell, also known for his work on Leicester Longwool sheep and English Longhorn cattle. Further standardization was undertaken in the late 1800s, with the formation of a breed society in 1878 and the christening of the breed name Shire in 1884.

The Shire peaked in popularity between 1880 and World War I, but its population plummeted with the mechanization of agriculture and transportation after World War II. The breed declined to its lowest point in the early 1960s, but its fortunes have improved considerably since then. Like Clydesdale horses, the Shire has benefited from its use in promotional hitches, especially those advertising breweries. The Whitbread’s hitch of gray Shires, for example, is as well known in England as the Budweiser Clydesdale hitch is in the United States.

Shires were first imported to the United States in the mid-1800s, and the American Shire Horse Association was founded in 1885. The registry has operated continuously except for 1955 to 1961, when most activity ceased and the breed almost became extinct in the U.S. The Shire then experienced a slow revival and it is now more numerous than it has been in many decades, both globally and in the states.

Shires average 17.2 hands (70″) at the withers, sometimes reaching 19.2 (76″), with a weight of greater than 2,000 pounds. Bay, black, brown, and gray are the most common colors in the breed. The head has a convex profile with a broad forehead and long ears. The neck is long and well arched, with a long shoulder. The legs are short and feathered below the knees and hocks. The overall impression of the Shire is one of substance and power.