Sheep have lived on the Shetland Islands for well over 1,000 years, adapting to the harsh environment and thriving in the cold, wet climate. The sheep of Shetland were an important part of subsistence agriculture of the islands, and the rugged habitat and geographical isolation produced a breed that is distinct and significant. 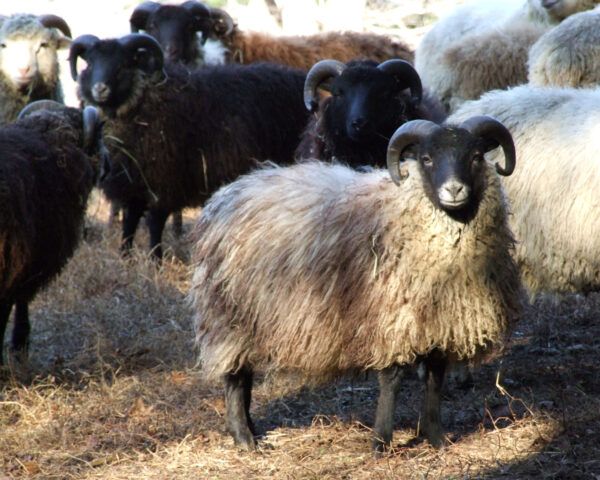 The Shetland breed likely descends from ancient Scandinavian sheep, and it is a member of the northern short tailed sheep breed family. Historically, only a few Shetland sheep were exported, and it was not until recently that large populations were established on the British mainland and in other countries. Though fleece continues to be the breed’s primary product today, Shetlands in Britain are also finding a commercial niche for crossing with Cheviots and other breeds to produce market lambs.

Shetland sheep are fine boned and small in size. Rams weigh 90–125 pounds, and ewes weigh 75–100 pounds. Most rams have spiraled horns, while most ewes are polled. Shetland sheep are calm and charming in disposition, docile, and intelligent.

The Shetland breed is especially prized for its wool, which is fine, soft, and strong. Fleeces average two to four pounds and vary in crimp from wavy to straight. Other characteristics of the fleece vary according to recent selection history. Populations of Shetlands in Britain, for example, have been selected for more standardized characteristics. These sheep tend to be single coated with fiber diameter averages of 23 microns and staple lengths of two to five inches. Landrace populations, such as those on the island of Foula, include a greater range of fleece types. These sheep may be double coated, with coarser outer wool of 30 40 microns and finer inner coat wool of 12 20 microns. Eleven colors and thirty color patterns are recognized in the Shetland breed. This diversity is a great asset both to the breed and to the fiber artisans who enjoy using its fleeces.

The North American Shetland Sheep breeders Association was formed in 1994 to promote the breed and to support the growing number of Shetland breeders in North America. The Shetland breed has prospered in recent years to the extent that it is no longer considered endangered by the Rare Breeds Survival Trust in Britain. Despite this success, there are concerns about the loss of genetic diversity within the breed. For example, white sheep now predominate on the British mainland and several of the color varieties have become rare. Though the Shetland sheep seems to have a secure future, North American breeders have an important role to play, not only through breed promotion on this continent, but also in the conservation of its entire range of colors, markings, fleece types, and other characteristics.