Geese have existed on the Shetland islands since the 1600s, but it is uncertain if they are the ancestors of the Shetland breed. They are believed to have originated from the Greylag, but no detailed records exist of their development. They were used by the crofters to graze pastures to rid them of parasites, including the river fluke, to protect their sheep from infection. They were also a good source of meat and down feathers.

A breeding program started by the Ibisters of Trondra (part of the Scallowag Islands, a subset of the Shetland Islands) has been instrumental in attempting to preserve the breed, although it has a very small gene pool.

They were first exported to the US in 1997 and are not currently recognized in the American Poultry Association Standard of Perfection. 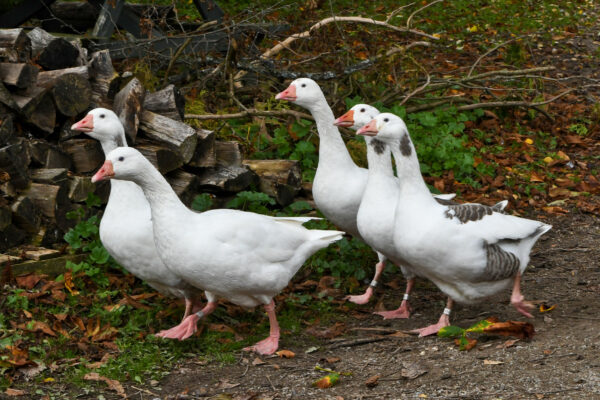 Because their coloration is sex-linked, they sometimes get confused with Pilgrim geese, though clear distinctions exist. The plumage of the gander is white, and his eyes are blue. Females are typically half-white and half-gray with a saddleback pattern. The shoulders, secondary flight feathers, under-wing back and thigh coverts are gray. The head and neck are mainly white, often with varying amounts of gray plumage. The eyes of a goose are brown or brown mottled with blue. The bill of both sexes is pale orange and reddens or turns pink towards the nostrils and a pink bean. The Shetland goose has a broad back and a well-rounded, keelless breast, similar to a rugby ball. The abdomen is relatively flat with a single-lobed paunch. The wings are powerful, allowing for full ability of flight. Some farms may need to clip one wing to keep them home.

Shetland geese, like the other native breeds on the Shetland Island, are small. Mature geese weigh 6-10 lbs. and mature ganders weigh 8-12 lbs.

Shetland geese combine several valuable traits, including a shortened bill for active foraging. They are noted for their foraging ability and can sustain themselves by grazing; this resourceful breed will forage year-round and will even forage for grit and grass under snow cover. The birds on the Shetland islands will forage on seaweed.

They lay about 30 large, white eggs yearly if eggs are removed from the nest. Females often go broody after laying 12-18 eggs and can be successful setters and mothers. However, some strains might require a broody duck to hatch eggs.

Shetland geese typically form very strong bonds with their mates, and because Shetland ganders rarely bond with more than one female and mate for life, keep equal numbers of each sex, preferably from multiple bloodlines, to allow breeding birds to pair up.

They retain many other natural instincts and will flock during the non-breeding seasons and band together to ward off predators.

Shetland geese are feisty and require a lot of handling from the time they are young to result in a suitable pet. They are protective of their nests during breeding season and will chase intruders. This is a difficult breed to get as they are rare in the US.