Characteristics:
May be aggressive, especially to other birds, but can make great pets

The Shamo chicken’s ancestors are believed to have been taken from Pakistan and India to Siam (now Thailand), and from there to Japan during the beginning of the Edo period (1603-1867). The name “Shamo” was a Japanese corruption of the word “Siam.” The breed is actually a strain of the Asil (Aseel) chicken.

As with many other Oriental fighting breeds, the Shamo chicken was developed to have strength for striking and endurance during sustained combat – qualities necessary in the naked-heel “boxing” form of fighting practiced in the Orient that is still legal in Japan today. Without a doubt, Japanese breeders admired many qualities of the original birds and applied much care into enhancing those qualities. The end result of their efforts was a breed uniquely Japanese. 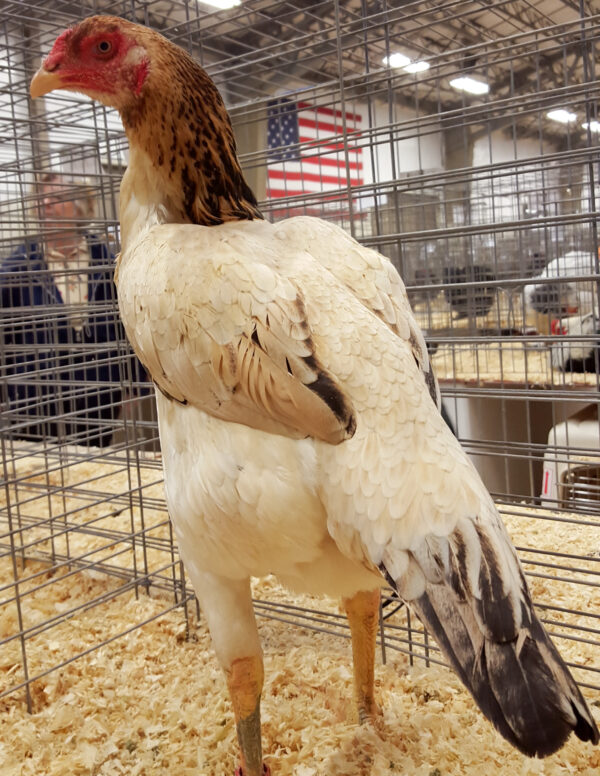 The first documented Shamos outside of Japan were noted by German poultry author Bruno Duringen. He wrote that the first breeding pairs of Shamos arrived in Germany in March 1884 and were owned by the Countess of Ulm-Erbach. It was not until 1953 that a second German importation of Shamos is recorded when the owner of the Hagenbeck Zoo was able to obtain birds from the Tokyo Zoo.

In 1941, to protect the breed from possible extinction, the Japanese government placed the breed under protection of law. The first Shamos known in America returned home with G.I.s after World War II, some probably being transported in the pockets of returning soldiers. In America’s south, the breed was admired and became popular for crossbreeding to produce superior fighting stock. Even today, the majority of Shamos in America can be found in southern states.

The Shamo chicken is recognized by the American Poultry Association (APA) and was included in the Standard of Perfection in 1981 in the following varieties: Black, Dark, and Black Breasted Red (Wheaten).

In appearance, the Shamo is a large, tall (up to 30”) chicken with upright, nearly vertical, body carriage, well-muscled thighs, yellow legs, wide, muscular body, and hard, closely-held feathers that often do not completely cover their bodies. In America, males should weigh 11 lbs. and females 7 lbs. Shamos have pea-shaped combs, tiny to non-existent wattles, pearl colored eyes, and exhibit a rather cruel expression. Shamo chickens are fair to poor egg layers of medium/large, light brown eggs (averaging about 90 per year), although they are one of the best layers of the game breeds. Because of their size, they can crush their eggs, but they are devoted mothers. They can produce a fair amount of meat which is noted for being excessively firm, even rather tough, and does not appeal to all palates. During the nineteenth century Shamo meat was favored as a “pep” food and slices of Shamo chicken were a part of many a Sumo wrestler’s diet.

In temperament, the breed is quite friendly to humans, though considerably pugnacious with other chickens of the same sex. Male chicks should be separated as they will fight with one another! Roosters should be kept separate from other males, with one rooster per group of hens/coop, but females can be integrated into a flock as long as the other birds are not small or easily intimidated. The breed can be territorial with other chickens and other species, like small dogs and cats. Shamos like to forage and do not do well in confinement. They don’t usually fly, so a 5 foot fence is more than adequate for them. Although they can be friendly with adults, they are not a good breed for young children because of their size. With their upright posture, strut, and bold attitude, the breed is generally kept as an ornamental curiosity or for showing.

Characteristics:
Can be aggressive, especially to other birds, but can make great pets