Characteristics:
Challenging for a beginner due to poor laying; limited numbers of eggs

The Sebright was developed by Sir John Saunders Sebright, the 7th Baronet of Besford, Worcestershire and a Member of Parliament for Herefordshire in the early 1800s, and is one of the oldest British bantams.

Saunders was a “gentleman farmer” who wanted to create a bantam breed that had well-defined lacing. His “recipe” for creating the breed is unknown, but in the process, he traveled the countryside collecting “odd” and “gamey” birds from the local poultry flocks, and may have imported birds from other countries. Some believe he may have used the Nankin, Polish, and Hamburg chickens. The most difficult part of the creation of the bird was getting it to have the desired lacing and breed true. The Sebright was finally introduced in 1810 – after about 20-30 years of work! The Sebright is considered a true bantam in that there is no standard version of the breed. 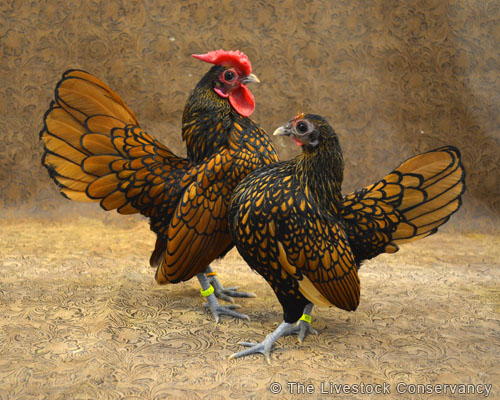 There are two accepted colors for the breed: Gold Laced and Silver Laced – gold or silver almond-shaped, short, tight feathers edged sharply in black (“laced”). The color is the same on both males and females, which is unusual in most breeds of chicken. Their wings are large for the size of the bird and angle towards the ground. Their tail is full and carried at about 70 degrees. Their body is compact and short, and they have a prominent breast, so their overall appearance is similar to a pigeon. The males have shorter, stockier legs than the females.

Sebrights have a mulberry (desired) or deep red color rose comb that ends in a straight, horizontal point called a “leader” on the males, and a similar but smaller comb on the females. Both sexes have bright red or mulberry, rounded wattles, ear lobes and faces; wattles are smaller on the females. Their beak is dark horn color on the gold laced variety, and can be dark blue or horn on the silver laced birds. Legs and skin are slate blue in color. Their large, black, round eyes give them a curious, wide-eyed expression. Males weigh 22 oz. and females 20 oz.

This breed is primarily ornamental. They only lay about 60-80 small (bantam-size small) eggs per year, and some strains are more fertile than others. Hens are not broody and do not have good maternal instinct, so if you want to hatch eggs you would do better with a surrogate mother. They are friendly if they are handled when they are young, but they are curious and prefer to be active. They are not a cuddly breed. They make good birds for 4H as show birds. They can fly into trees to roost, so although they like to forage, it is best to keep them in a way that they can’t get out of reach as they can be difficult to catch! This breed can be very vocal if agitated.

They do not handle cold and damp well, and do better overall in warm climates, so care must be taken if you want to keep them in cooler climates. They are susceptible to Marek’s disease, so should be vaccinated.

Characteristics:
Challenging for a beginner due to poor laying, limited numbers of eggs