“In eastern Germany, Albert Franz of Chemitz began developing a new multi-purpose duck in 1930. He used Rouen, German Pekin, and Blue Pomeranian ducks in his breeding program and introduced this new creation at the Saxony Show of 1934.” (Holderread) Chemtiz’s goal was a duck for exhibition that would lay a lot of eggs and produce delicious meat. It was named after the show in which it was first shown.

Most Saxony ducks didn’t survive World War II, so Franz renewed his breeding program after the war. In 1957, Germany recognized them as a distinct breed. Saxony ducks made their way to the United States when the Holderread Waterfowl Farm in Oregon imported them in 1984. They were admitted into the American Poultry Association’s Standard of Perfection in the Fall of 2000. 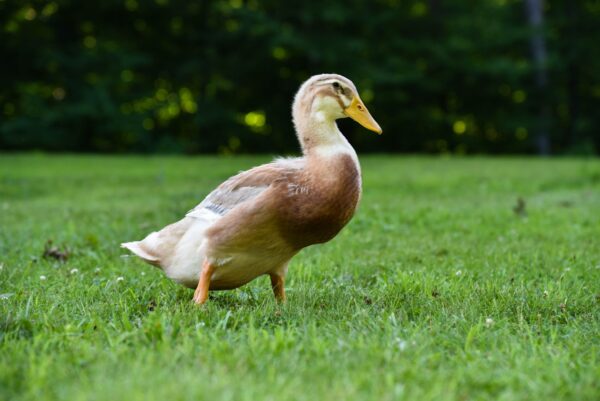 Mature Saxonys weigh between 8-9 lbs. Drakes are generally about a pound heavier than the ducks.

Its large head is somewhat oval-shaped and blends smoothly with its medium-thick neck that is slightly arched forward. Their compact body is long, broad across the shoulders, and has a prominent chest that is smoothly rounded. This duck’s carriage is 10-20 degrees above horizontal when relaxed.

Drakes display the typical “Mallard” pattern, but their colors are distinct from any other breed. The drake’s head, back, and wing markings are blue-gray. The breast feathers are a rich chestnut-burgundy, the underbody and flanks are cream, and the neck ring white. Legs and feet are orange or reddish-brown and the bill is yellow or orange, often with pale green shading. The females are buff with creamy white facial stripes, neck ring, and underbody. The bill is orange, often with brown shading. The legs and feet are orange to reddish-orange.

The Saxony is an active forager and excellent layer with a typical egg production of 190-240 large, white eggs annually. They will lay during the winter. Saxony don’t grow quite as fast as some ducks, “but they have interesting plumage, produce meat with more flavor and less fat, are better foragers, and are more likely to incubate and hatch their eggs. Saxonys are one of the best large all-purpose breeds of ducks and adapt well to a wide range of environments.” (Holderread)

“When choosing a Saxony duck for your flock, select vigorous, strong-legged birds that are free of physical deformities. Consider growth rate, egg production, and forage ability for utility birds. For show birds, choose birds that conform to the standard.” (Holderread)

Saxony ducks are friendly and curious and can make good pets. Their feathers and down can be used for pillows. The drakes are not aggressive and are quieter than the ducks, who can be loud and easily aroused. They like to live with other ducks, but don’t pair-bond. This is a good breed for a beginner.