Use:
Meat, Milk, some Cashmere

San Clemente Island is located off the coast of southern California. It is owned by the US government and used and managed by the US Navy. Goats were first introduced to the island from a previously seeded population that was imported from Santa Catalina Island to San Clemente Island (about 68 miles west of San Diego, CA) in 1875. When the US Navy eventually became responsible for the island in 1934, hunting and trapping of the goats was allowed up until 1972. At this time a survey concluded that there were 15,000 goats on the island and that they represented a nuisance to native plants and wildlife. As a result, a systematic removal program was begun to reduce the goat population. By 1980 an estimated 4,000 goats still remained on the island. 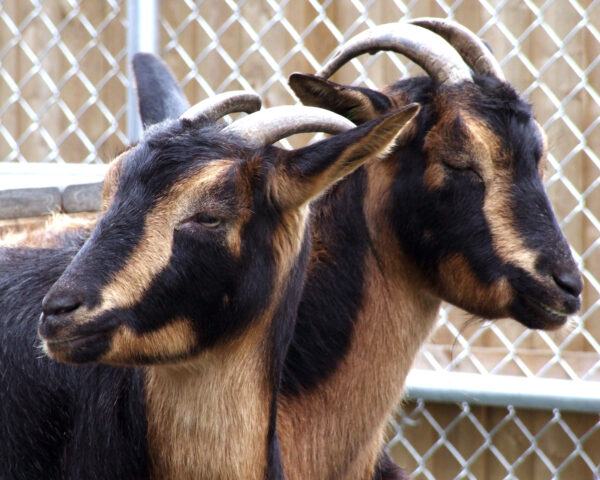 To continue more effectively with the goat population removal, the Navy proposed a shooting program to be conducted from helicopters. This program was blocked in court by the animal welfare group Fund for Animals. Under the court decision, goat trappers were brought in to remove approximately 3,000 goats from the island that were to be returned to domestication. Fund for Animals placed most of the animals with agreements that the goats would not be bred by the new owners. Other San Clemente Island goats went directly from the barges that brought them off the island to individuals and farms.

The Livestock Conservancy, in collaboration with the University of Cordoba in Spain, conducted a DNA study of the breed in 2007 and found that the San Clemente Island goat is a genetically distinct breed and unrelated to the numerous other breeds in the study. The findings raise many questions about the origin of the San Clemente Island goat and further study is needed to gain a better understanding of this unique breed, so this unique goat remains on the Livestock Conservancy Conservation Priority List.

Their head profile may be dished or straight. Their ears are medium length and may be crimped or erect. San Clemente Island goats are typically red or tan with characteristic black markings, but as the goats on the island once exhibited a wide range of colors and color markings, these can occasionally be seen today.

Both sexes are horned and although their large horns may resemble those of Spanish goats, San Clemente Island goats are not of Spanish origin. Males’ horns generally grow back from the head then twist outward; females may have horns of varied length and shape. Less common are horns that grow straight up from the head before curving.

Does generally have gentle temperaments and are good mothers; many have extra teats on their udders which are acceptable for the breed. They have the potential to produce rich milk that can be used for cheesemaking and yogurt. Bucks lack the glands that often cause an off-putting “goat smell” that bothers some people. The breed can also produce cashmere and is exceptional for clearing land of brush. They are entertaining and they like to climb but will need a sturdy fence away from climbable objects to keep them contained!

The breed is still critically endangered but is hard and self-sufficient, and has proven adaptable in a variety of climates, so although this breed is hard to find, it is an option for stewards in many parts of the country.