Temperament:
Calm, some males are aggressive

Roman geese originated in Italy where, more than 2,000 years ago, the Romans considered them sacred to Juno, the goddess of marriage. In 365 BCE, as the Gauls attempted to invade Rome under cover of night, it was the honk of a Roman goose that awoke Marcus Manlius to save the capital. Roman geese are thought to be one of the oldest goose breeds.

While it is not known when the first tufted Roman geese appeared, there are records from the early 1900s that describe Roman geese with a small crest. It is very possible that the modern Tufted Romans appeared as mutations in non-tufted Romans.

While we do not know for sure when the first Roman geese were imported into North America, we do know that Richard Gidley of Salem, Ohio imported some, and bred and distributed them all over the US. They were admitted to the American Poultry Association’s Standard of Perfection in 1977. 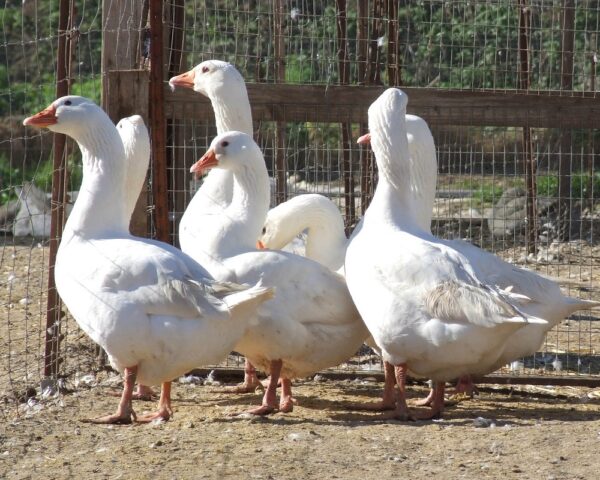 The breed is kept for different purposes in different parts of the world. In Europe, Roman geese are utility birds, bred for a rapidly maturing, small, meaty carcass. The tuft is optional. In Australia, the breed is used both as an ornamental breed and for meat production, and the tuft is also optional. In North America, many strains are largely ornamental, bred for a distinguishing crest, or tuft. In common North American usage, “Roman” goose is used interchangeably with “Tufted Roman” goose.

Despite its illustrious history, the Roman goose is a small breed, with mature ganders weighing 12 lbs. and mature geese weighing 10 lbs. It is fine-boned and plump. The body is round and full, with a uniformly broad back. The breast is full and well rounded, as is the abdomen, and the paunch has dual lobes though it is not heavy. The tail is short and the wings strong. The neck is of medium length, stout, and only slightly arched. The head is oval. The tuft of feathers on their crown, for which they are named, begins just over the eyes and inclines backward and appears somewhat like a tiny helmet perched on top of the goose’s head. In some poultry breeds the tuft or crest is a result of extra skin or skull shape, but in the Tufted Roman goose, its head feathers grow longer and upright in that small area.

Roman geese should be pure white, according to the American Poultry Association’s American Standard of Perfection, although some strains have gray or buff feathers. Goslings may show some gray, but this is often molted in the first year. Bills and legs are pinkish or reddish-orange, and the eyes are blue.

They’re a moderate egg-layer, laying 25 to 35 large, white eggs per year. They are good parents and can raise their own offspring. Ganders can be mated with two to four geese.

Roman geese in North America descend from a small group of birds, resulting in a small genetic pool. As a result, special care must be taken when selecting breeders to avoid genetic defects, including crooked toes, wry tails, kinked necks, and lack of vigor. Select against bright orange legs and bills, which are a serious fault if you are showing your birds.

Look for calm, gentle, robust birds with small, compact bodies, and large tufts centrally placed on the head. Be aware that there are tufted birds created by crossing, and some people may call any of them Roman Tufted. Be sure to obtain your birds from reputable breeders.

Roman geese are generally calm and pleasant and can be a good choice for small farms if you want to raise one breed, and for beginning farmers. They become attached to their owners, especially if they are handled a lot when they are young, although some ganders can be aggressive, especially around females They grow quickly, and despite their smaller size, Roman geese produce a plump roasting bird. They are alert and can be very loud, so they can make good watchdogs but are not a good choice if you have neighbors close.

Temperament:
Calm, some males are aggressive