Notes:
Color pattern a challenge to perfect, owners train rabbits to run and pose for the show table

The Rhinelander was developed by Josef Heintz of Grevenbroch, North Rhine-Westphalia, and was first shown in 1902 in Germany. Josef Heintz had crossed a Japanese (a.k.a. Harlequin) buck to a common gray-checkered doe. One of the litter, a buck, was the first “Rhinelander,” having the desirable orange and black marking on the chin, ears, and butterfly markings – the spots on one side of the rabbit being all orange and on the other side all black. Heintz then mated a Japanese (a.k.a. Harlequin) buck to a Checkered Giant doe, which produced a desirable doe in the resulting litter. Using the buck and doe thus produced, he proceeded to breed – keeping the best does and mating them back to Japanese bucks. He succeeded in producing the Rhinelander, and in 1905 the breed was given a standard in Germany. 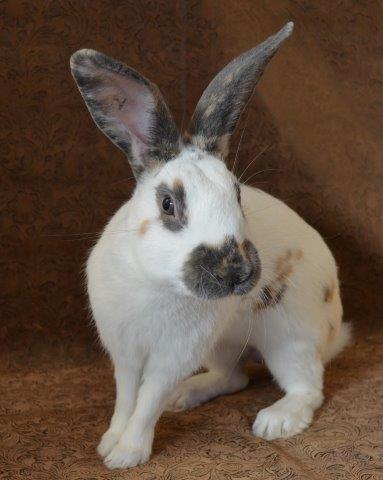 Rhinelanders were brought to the United States in 1923 and accepted to the Standards of National Breeders and Fanciers Association of America in 1924. The Rhinelander disappeared from the U.S. by 1932, perhaps being absorbed by the popular Checkered Giant, which at that time was accepted in all known colors.

Robert Herschbach of California attended a show in West Germany in 1972 in which he saw the beautiful Rhinelanders and purchased four animals for his rabbitry. He formed the Rhinelander Rabbit Club of America in 1974. The America Rabbit Breeders Association in the Book of Standards once again recognized the Rhinelanders in 1975.

There are two color varieties accepted by the American Rabbit Breeders Association – white with black and orange markings and white with blue and fawn markings. The hair is to be short & dense. The body must not be too slender and weight is 7 to 9 pounds. Eyes are chestnut brown, and V-shaped ears no longer than 4 3/4 inches with no white are required.

Notes:
Color pattern a challenge to perfect, owners train rabbits to run and pose for the show table