The Redcap is one of the oldest dual-purpose chicken breeds. They originated in the Derbyshire and Pennine area of England. During the early to mid-1800s, Redcap chickens were considered one of the most profitable breeds a farmer could have – providing there was an egg market nearby. The breed lays good-sized eggs and has delicate flesh, so spent hens could be used to feed the family, but it is the high rate-of-lay combined with superior foraging and survival skills that earned the Redcap chicken a place on a farm or homestead. However, Redcaps were valued for their production so they were not refined for show points, had a somewhat “wild” temperament, and had a difficult-to-reproduce color pattern in an unrefined state. Though very useful, the breed fell out of favor and became nearly extinct in its native England by 1900. 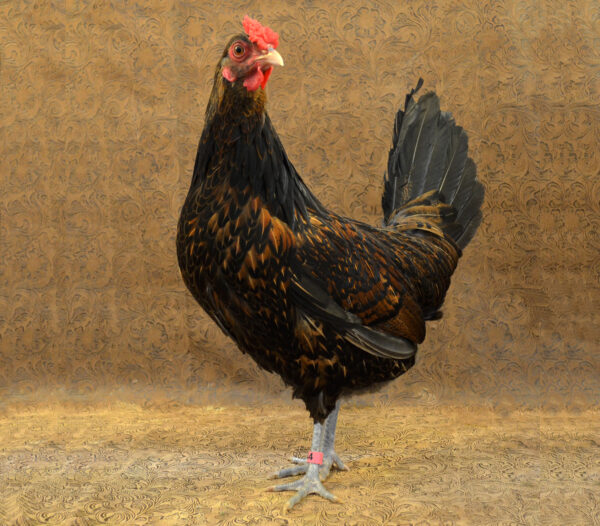 It is unknown when the Redcap was brought to the United States. There is reason to speculate that the so-called “Red Dorkings” at early American shows were actually Redcap chickens. The breed was widely distributed across America before 1870 and through the 1890s, and there were many large flocks of Redcap chickens being kept by farmers and poultry fanciers for egg production. Then, within a few years, the breed almost completely disappeared. Although they are still very rare in both England and the U.S., their numbers are starting to go up slowly due to the efforts of dedicated breeders. Redcap chickens were recognized in the American Poultry Association’s Standard of Perfection in 1888.

The breed’s most distinguishing feature is the very large, rose-shaped comb from which it derives its name. The comb has small, rounded points and a distinct spike called a “leader” pointing backwards. Redcaps have deep red to black plumage tipped with a blue-black, half-moon- shaped spangles, dark orange neck and saddle hackles, and leaden-blue colored legs. There is only one color variety. They have white skin. At maturity, males weigh 7.5 lbs. and females 6 lbs.

Despite their red ear lobes, they lay white-shelled eggs – a unique characteristic as almost all breeds that lay white eggs have white ear lobes. They can lay 150-200 eggs per year, and as they are long-lived, they continue to lay for many years.

Redcap chicks are vigorous and hatch yellow with a dark stripe pattern on their backs and a little black on the top of their heads. When culling this breed, keep in mind that the adult color pattern and large comb are not fully revealed until the second or third year.

They are very lively and hardy, but not broody. They can be shy. They prefer free-ranging, do not like to be confined, and require a lot of space. They are also fliers. They do well in the cold, but are not particularly heat-hardy.