Northern German farmers developed the Pomeranian in the 1500s from the European Graylag goose and was specifically developed with a single-lobed paunch. In their native Germany, the term “Pomeranian” refers to a utilitarian goose breed. It is also known as the Rügener goose, Pommerngans, and L’oie de Pome’ranie, and is a popular goose in Europe, especially in Germany and the Eastern European/Baltic countries.

Although the Pomeranians have been an officially recognized breed since 1912, it was not included in the American Poultry Association Standard of Perfection until 1977, and only the Gray and Buff Saddleback variety are currently recognized. German Pomeranians are found in white, gray, saddleback buff, or saddleback gray. 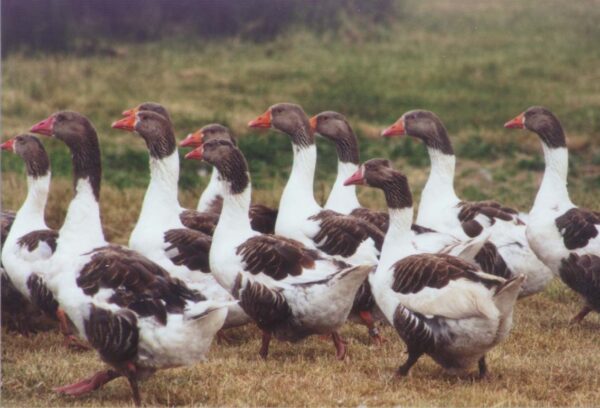 The head, back, and flanks of a saddleback are either buff or gray. All colored feathers of the back and flank are edged in near-white, and the rest of the bird is white. A Pomeranian should have a pinkish-red bill, reddish-orange legs and feet, and blue eyes. The Pomeranian is distinctive among European geese breeds for its single-lobed paunch. In addition, Pomeranian geese have slightly flattened heads. This, in combination with their stout necks, protruding breasts, and rounded bodies, gives them an “arrogant” appearance according to some breeders.

When selecting breeders, look for birds with chunky bodies and well-defined markings. When viewed from behind and above, the colored areas of the backs and shoulders should be in the classic “heart” shape. Solid-colored heads are preferred, but most specimens have white feathers around the base of their bills. Some strains produce birds with slight indications of knobs at the base of their bills. Guard against this fault since it is evidence of crossbreeding. Avoid breeding birds with dual-lobed paunches, dewlaps, orange bills and feet, excessively white heads, dark feathers in the wings, or undersized bodies.

Pomeranian ganders can weigh 17+ lbs. and geese 15+ lbs. They are seasonal layers and can lay up to 70 large, white eggs per season, although most lay fewer. Ganders can be mated with three to four geese. They are considered a dual-purpose breed; during the colonial period, the breed was popular as a good table bird and for smoked goose breast.

While some Pomeranians are docile, pleasant, social, and chatty, others are quick to read nervous body language and respond aggressively. They tend to greet visitors noisily, making them good watch birds.

Pomeranians are a good all-around breed for a colorful home flock. While the plumage markings are fairly fixed genetically, producing a properly marked specimen is a challenge.

Temperament:
Some males are aggressive