How to Collect a DNA Sample Video

How to Microchip Video

The Poitou ass is an ancient French donkey breed valued for the production of mules. They were developed in the Poitou region of western France, where mule breeding has been documented for over one thousand years. Standardization of the Poitou breed occurred by about 1700, and the modern studbook was established in 1884. In France, the breed is referred to as Baudet du Poitou, as baudet translates to “sire of mules,” distinct from the French term “ane” for common donkey. 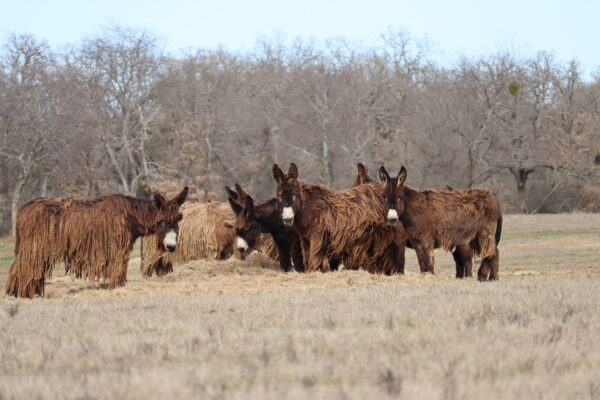 The French mule breeding industry was a highly developed and lucrative enterprise. Poitou jacks were bred to mares of a specific horse breed – the Mulassier (or Poitevin) – to produce mules for both riding and work. While mules were promoted across Europe, breeding stock was closely held in the Poitou region. The breed nearly became extinct after World War II, when the demand for mules collapsed. The Poitou’s limited geographic area increased its vulnerability. Fewer than 80 Poitous survived in 1980.

In the late 20th century several organizations in France organized to protect the breed from extinction. The Parc Naturel Regional du Marais Poitevin has made conservation of the Poitou donkey and the Mulassier horse (Poitevin) a part of its mission to protect the domestic heritage as well as the wild environment. La Sabaud, a network of breeders, exists to promote the breed and raise funds for its conservation. La Sabaud supports the efforts at the Asinerie Nationale Experimentale, an experimental farm that breeds Poitous in conjunction with the Parc. L’Association des Eleveurs des races Equine, Mulassiere et Asine, Baudet du Poitou is the registry organization.

In 2012, approximately 2,500 pure Poitous were registered in the studbook. A challenge facing the breed in the United States is to continue to inventory and document the asses that are claimed to be Poitous but may be of mixed heritage.

Poitous have the conformation and strength typical of mule-breeding asses everywhere. They are tall, standing 14 to 15 hands (56 to 60″) high at the withers and weighing 750 to 950 pounds. Their heads are large and long, with long ears, and their bodies are muscular with heavy bones. The feet should be large. The most striking feature of the breed is its long hair, which may hang in cords from the entire body.

Poitous are found in black or dark brown, without a dorsal stripe. Other colors are not accepted.

Contact The Livestock Conservancy by email at info@livestockconservancy or by phone at 919-542-5704 with any questions about Poitous or the census.

Breeders of rare Poitou donkeys carry a heavy responsibility. Like all other equine breeders, they invest a tremendous amount of time and resources to ensure the health their foals. For Poitou donkey breeders, though, every new foal they produce will play an important role in saving this breed from extinction. For two Poitou donkey breeders in Texas, the routine use of an immune supplementation treatment for newborn foals has resulted in better foal survival and health outcomes. A description of the treatment is available as a downloadable PDF reference for breeders who may wish to consider its use on their farm. This information is intended for educational purposes only. It is not meant to be used as a substitute for the advice of the breeder’s own qualified veterinarian.