The Plymouth Rock was developed in America in the middle of the 19th century and was first exhibited in Boston, Massachusetts as a breed in 1849. These first specimens seemed to “lose their identity” and the breed disappeared for two decades until it reappeared at another poultry show in Worchester, Massachusetts in 1869. These later birds are considered the progenitors of the Plymouth Rocks we know today. 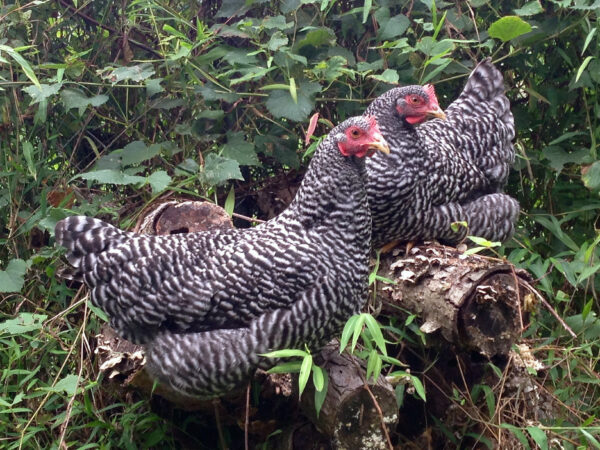 Several individuals claimed to be the creator of the Plymouth Rock, by using crosses of Spanish, White Cochin, Dominique, Buff Cochin, Black Java, and Brahma. The original Plymouth Rock chicken was Barred (“Barred Rock”) and other color varieties were developed later: White, Buff, Silver Penciled, Partridge, Columbian, and Blue. The breed was accepted into the American Poultry Association’s Standard of Excellence in 1874.

The Plymouth Rock became popular very rapidly and, until World War II, no breed was ever kept and bred as extensively. Its popularity came from its qualities as an outstanding farm chicken: hardiness, docility, broodiness, excellent production of brown eggs, and meat that was considered tasty and juicy. The Plymouth Rock was one of the foundation breeds for the broiler industry in the 1920’s.

Plymouth Rock hens grow to 7.5 lbs. and males to 9.5 lbs., and their rate of lay is around 200 large, brown eggs per year. Their laying is strong for the first few years, but then a slow decline in production begins, although hens may continue to lay into their 10th year. Hens are usually good sitters and mothers. Chicks feather quickly and are mature by 8-12 weeks, so they make good broilers.

This breed has a bright red, single comb, face, wattles, and earlobes. Their beak is horn colored, and eyes reddish-bay. Their single comb has five evenly serrated points with those in the front and rear shorter than those in the middle. They have yellow skin and legs, and four toes on each foot.

Their feathers should be crossed by sharply-defined, regular, parallel bars of alternate light (not quite white) and dark (not quite black) color. This barred color pattern is due to a dominant sex-linked gene that does not add dark bars to light feathers but prevents pigment on colored plumage, thus creating light bars on dark feathers. The male carries two copies of the gene and the female only carries one, which is why the males are usually lighter in color than the females.

They have a calm temperament and both males and females are generally sweet and docile. They are easy to keep in a flock as they get along with other breeds. They are friendly with people and are a good family breed as they are good with children. They like attention and will follow their people around. They make good pets and are good for 4H projects.

Rocks are cold-hardy due to their early feathering, and they tolerate confinement if they have enough room to roam as they prefer to free-range. They do not fly and are a chatty but quiet breed. They are a good choice for a first-time chicken owner.