It is difficult to tease the facts from the romance in the origin of the Pilgrim goose. Popularly thought to have come to America with the pilgrims, the Pilgrim goose, as we know it, is a recently-developed breed. The sex of both goslings and mature Pilgrim geese can be distinguished by the color. This is known as auto-sexing. Poultry scientist Robert O. Hawes has found numerous references to auto-sexing geese in colonial America, western England, and Normandy, France, but the breed was never referred to by a name. According to some authorities, the Pilgrim goose is related to the now rare “West of England” goose, another auto-sexing breed, which could possibly have arrived with early colonists.

Dave Holderread, an experienced waterfowl breeder and an author on waterfowl husbandry and conservation, concludes that small populations of auto-sexing geese likely existed in a number of locations. He states that “studies on the inheritance of plumage color and patterns in domestic geese have shown that when gray-colored geese and white geese of European descent are crossed, their offspring, when intermated, will produce some progeny that carry auto-sexing plumage color similar to that seen in Pilgrims.” (Holderread, 1986) 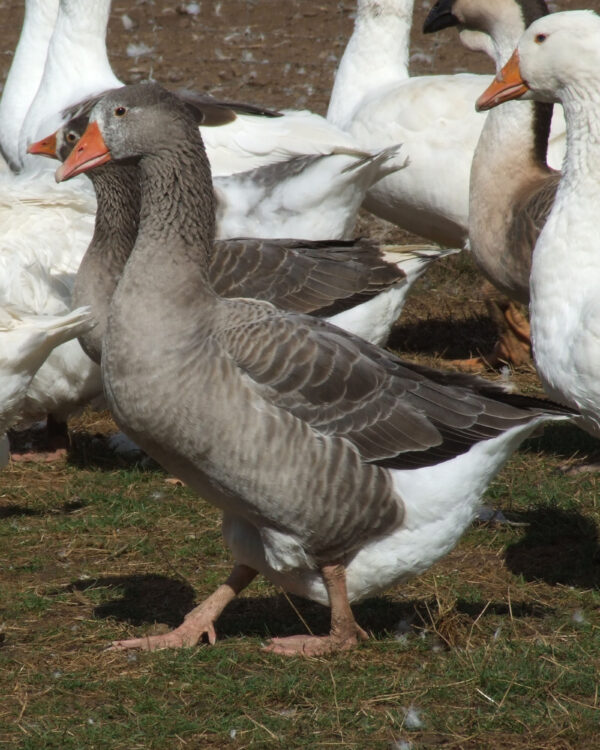 But Oscar Grow, a leading authority on waterfowl in the 1900s, claims to have developed the breed in Iowa, and that his wife named them in memory of their relocation – or pilgrimage – to Missouri during the Great Depression of the 1930s. Authorities agree that the breed was first documented by the name “Pilgrim” in 1935, corresponding with the Grow family’s pilgrimage. The Pilgrim was admitted into the American Poultry Association’s Standard of Perfection in 1939.

The Pilgrim is one of two American goose breeds that is sexually dimorphic (auto-sexing), the other being the Cotton Patch. Day-old males are silver-yellow with light-colored bills, in contrast to the olive-gray females with their darker bills. Adult ganders (males) are mostly white, usually with gray rumps (that are covered by the wings) and traces of color in the tail and wings. Mature geese (females) are soft dove-gray with varying amounts of white in their faces. Bills and legs are orange in both sexes, while the eyes are blue in ganders and dark brown in geese.

The head is trim, the crown is often slightly flattened, and the neck is average in length and thickness. Their bodies are full and plump, with a smooth, keel-less breast. They should have two rounded fatty lobes on the abdomen. Pilgrims are medium-sized geese, weighing 13–14 lbs. at maturity. Properly managed, they lay 35-45 six-to-seven oz. white eggs annually.

“Pilgrims are rugged, quiet, docile, good foragers, excellent natural parents, and make good medium-sized roasting birds. Because they are sex-linked for color, it is a simple matter – even for the novice – to keep the correct ratio of males to females when selecting young for future breeders. Ganders can be mated with three to five geese.” (Holderread, 1981). When selecting for breeding stock “look for broad backs and breasts that are keel-less. Stay away from using birds with any sign of a knob (an indication of crossbreeding), long necks and legs, shallow breasts, ganders with excessive gray in the plumage and geese with predominantly white necks. Because Pilgrims are noted for being sweet-tempered, this trait should be considered when retaining birds for reproduction” (Holderread, 1981). The Pilgrim goose is known for being calm and personable. For those seeking a medium-weight goose, Pilgrims are an excellent choice for the home goose flock.

Holderread, Dave. 1981. The Book of Geese: A Complete Guide to Raising the Home Flock. Hen House Publications. (This edition is out of print, but an updated version is due soon (2022))