Notes:
Diminutive horses; proportioned like a horse, not pony, good with children and people

Small, refined horses appear in Persian art and artifacts as early as 3,000 B.C.E. Among these are the tri‑lingual seal of King Darius the Great, the staircase frieze at the Palace of Persopolis, and the Gold Oxus Treasure of Darabgird. For example, the King Darius seal portrays the King riding a horse so small that his feet ­almost touch the ground. 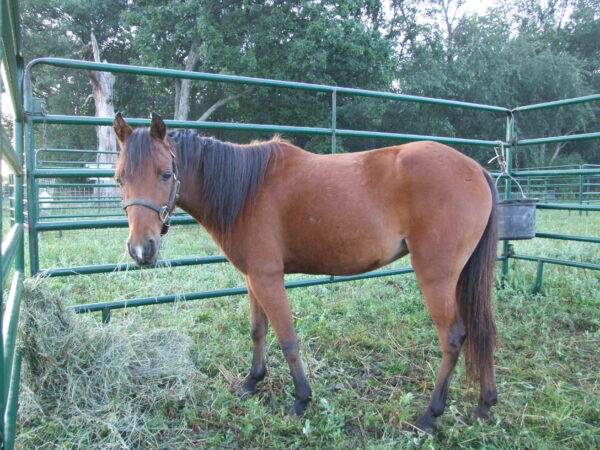 Until recently, it was believed that such horses went extinct long ago, but the rediscovery of the Caspian strongly suggests that the breed is a direct descendant of this ancient Persian ­lineage. Caspian horses are being studied by the scientific community and The Livestock Conservancy to document their antiquity, characterize its relationship with other breeds, and describe its place in equine history. There is mounting physical and historical evidence that Caspians may be one of the genetic foundations for modern horse breeds.

The Caspian horse owes its survival to Iranian aristocrat Narcy Firouz and his American-born wife, Louise Laylin Firouz. Narcy and Louise went to live in Iran in 1957 and taught horsemanship in Tehran. One of the difficulties they faced was finding small, even‑tempered mounts for the children they instructed. This led them to explore rumors of small horses said to be found in the remote villages of the Elburz region above the Caspian Sea.

In 1965, they went on an expedition to this region and discovered that the rumors were true. There were indeed a few distinctive and diminutive horses. Louise named the breed the Caspian horse and the couple, taken by these unique horses, established a breeding center for its conservation. As the number of Caspians in their herd increased, they were able to spare a few for export and sent 26 horses to Europe between 1971 and 1976. These became the foundation for the breed’s survival outside of Iran. In 1994 the first Caspians that would be part of a breeding program arrived in the United States from England.

The massive political upheavals in Iran have created significant ­obstacles to the Caspian’s survival in its ­native country. Despite these setbacks, the Firouzes continued to live in Iran and work diligently on behalf of the Caspians and other rare breeds such as the Turkmen horse, which can still be found in the region. Narcy sadly passed away in 1994, leaving Louise to continue working with her beloved horses until her passing in 2008. Shortly after her death, a service was held in Iran honoring Louise as a Turkmen elder. This is the first time in history such an honor was given to a woman. The Turkmen elders attending rode their Turkmen horse to the service.

Small numbers of feral Caspians remain in remote areas near the Elburz mountains of northern Iran. Persicus Farm, a national Caspian stud farm in Iran, was established by Louise Firouz and is still maintained by the Iranian government. The Caspian is considered a national treasure and its future is looking brighter in its home country. Caspian numbers are growing, with the majority of the population outside of Iran remaining in England. An International Caspian Society (ICS) has been formed to maintain a registry for the breed and support it globally. Under the ICS, regional Caspian societies have been established in Iran, the United Kingdom, Australia, Western Australia, New Zealand, the U.S., Norway, and Sweden to promote the breed within those countries.

The Caspian has a very distinctive appearance. While small in size, it’s proportioned like a horse rather than a pony. The breed’s features include a vaulted forehead, slim body and legs, high croup, and dense coat. Horses average 11.2 hands and should not exceed 12.2 hands at the withers. Caspians are found in all colors except piebald or skewbald (pinto). Grey individuals will transition through many shades of roan before fading to near white at maturity. These highly alert and intelligent horses are excellent children’s mounts and excel as event horses with their elegance and outstanding jumping abilities. They also perform well as driving horses.

Notes:
Diminutive horses; proportioned like a horse, not pony, good with children and people