Early explorers brought livestock to the Americas beginning in the 1500s, including pigs that either escaped or were deliberately freed in their new environment. These pigs were the foundation for the historic populations of swine in the southern United States. One being the Ossabaw, a free-range breed that’s found on Ossabaw Island, off the coast of Georgia near Savannah.

There is historic agreement that Ossabaw Island hogs have descended from foundation stock brought by Spanish explorers, inferring that the pigs are Spanish in origin. However, DNA analysis suggests that the Ossabaw Island pigs came from the Canary Islands, an important stop by the Spanish and Portuguese explorers en route to the west. Mitochondrial DNA (mtDNA), which comes only from the maternal side, showed that Ossabaw Island hogs are more like the pigs on the Canary Islands, which reflects the influence of Asian pigs. The mtDNA of Spanish (or Iberian) pigs reflects only European influences. Additional genetic research is needed to understand the relationship of the pigs on the Canary Islands and on Ossabaw Island with Spanish pigs, including the paternal side of the DNA picture. 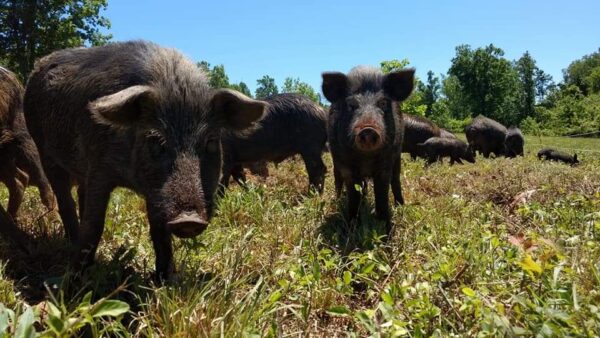 The Ossabaw hog is unusual and important for three reasons. Its history as an isolated island population means that they’re the closest genetic representative of historic stocks brought over by the Spanish. Second, the presence of pigs on Ossabaw Island provides scientists with an exceptional opportunity to study a long-term natural population. Third, the Ossabaw is biologically unique, having been shaped by natural selection in a challenging environment known for heat, humidity, and seasonal scarcity of food.

Ossabaw hogs may be as small as 100 pounds, but they’re able to store astounding amounts of body fat in order to survive during the seasons when there is little to eat. This biochemical adaptation is similar to non-insulin-dependent diabetes in humans, making the pigs a natural animal model for this disease. The pigs are also highly tolerant of dietary salt. Ossabaw Island hogs on the mainland, once removed from the selective pressures of their island home, have lost some of their unique survival adaptations. Their ability to fatten is both an advantage and a disadvantage, and breeders must watch their feed intake to prevent obesity.

Ossabaw hogs are usually black, although some are black with white spots or light with black spots. They have adaptations harking back to their history before being re-introduced to domestication. Adult pigs are very hairy with heavy bristles on the head, neck, and topline. The frayed tips of the bristles, a primitive characteristic, are another indication of the distinctiveness of the population. Their snouts are long and slightly dished. The head and shoulders of the hogs are heavy, and while they seem out of proportion to the rest of the body, that impression belies the speed and agility of these animals in the dense undergrowth of the island. True Ossabaws do not produce the striped piglets typical of populations that have had Wild Boar introductions.

Though pigs have lived on Ossabaw for several centuries, they do have an impact on the island’s ecology. Environmentalists became concerned, and the pigs may or may not be allowed to remain. The fate of the breed now rests upon complex questions of how it will be managed in its habitat without having a negative impact on the island’s ecology. Ossabaw Island pigs have been well established in domesticated herds on the mainland since the 1980s. They’re found to be particularly well suited for sustainable or pastured pork production.