Temperament:
Calm, but not docile

For much of its history, the Russian Orloff was thought to be from Russia, but current research shows that the breed first appeared in Persia as the Persian Gilan chicken, and was found in eastern Europe and Asia by the 17th century. Russian tradition credits Count Orloff – Alexey Grigoryevich Orlov (1737-1808) – with the importation and promotion of the breed in Russia in the 19th century, and it became known in the West by his name and due to his efforts. 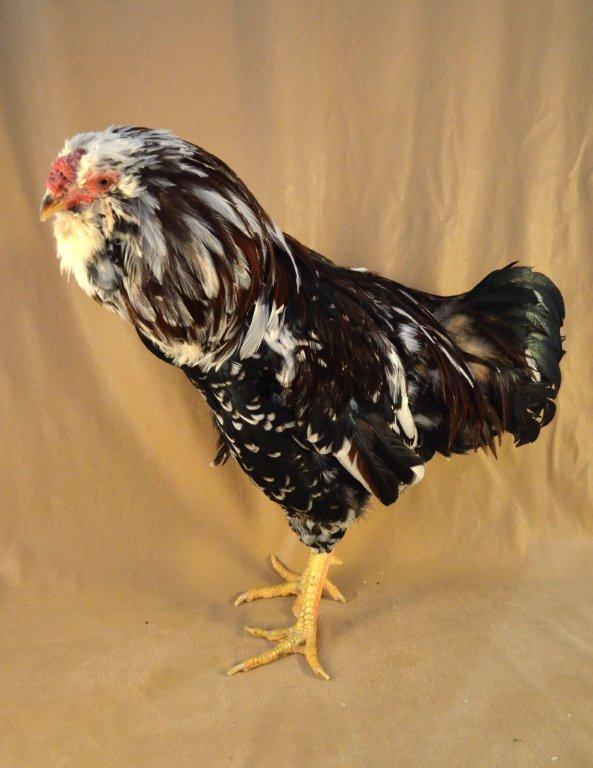 It is thought that the Count imported English Gamecocks to Russia and bred them to the Gilan chickens, with later crosses to Ushanki, Malay, Bruge, Belgian Game, a bearded European Spangled breed, and Thuringian birds to get the desired breed characteristics and help the Orloff survive the extremely cold and harsh conditions of the Russian winters.

Although the Russian Orloff chicken wasn’t known in England and western Europe until 1899, the breed had already arrived in America and was included in the American Poultry Association’s Standard of Perfection from 1875 until 1894 when it was removed due to a lack of popularity. Famous American poultry author, John Robinson, remarked in the Reliable Poultry Journal that he had seen the breed as a child in America many decades before 1899, likely in the 1870s.

The Russian Orloff is tall, with a muff and beard and very thickly feathered neck, minuscule wattles, and a cushion/strawberry comb. The first APA standard lists the breed as having a rose comb (double comb) without a spike and solid black plumage. This lack of spike is genetically consistent with what we now call a cushion comb, or a strawberry comb. (Strawberry, cushion, and walnut combs result from the interaction of the dominant genes for rose and for pea-shaped combs.) They have yellow shanks and feet, a yellow beak, and red or amber eyes. Russian Orloff males should weigh 8.5 pounds and the females 6.5 pounds. They were primarily favored for meat production, but are noted for being hard-fleshed.

The Russian Orloff chicken can be found in three color varieties: red, white, and spangled. The once-popular black variety is rarely seen anymore. At least three other color varieties have also existed: mottled, black-breasted red (wheaten), and buff. The British Standard lists four color varieties of Russian Orloff: black, mahogany, spangled, and white. The chief distinction of this chicken is their extreme hardiness once they are mature.

They tolerate cold and bad weather, and can survive when other breeds cannot. Russian Orloffs are indifferent layers of small/medium light brown eggs, laying only about 100 eggs a year. They’re classified as non-broody,

They are a calm and friendly breed, handle confinement well but also like to free range. It gets along with other breeds of chickens, but will stand its ground with more aggressive birds, if necessary.

Temperament:
Calm but not docile