Notes:
Record is 4,665 lbs of milk per year; less fearful of water and trail obstacles than other goats; does can be pushy with each other

The Oberhasli, also known as the Oberhasli Brienzer, is a Swiss dairy goat developed in the mountainous cantons of Bern, Freiburg, Glarus, and Graubunden in Switzerland.

Oberhasli goats were first imported to the United States in the early 1900s, though it wasn’t until 1936 that H.O. Pence imported 4 does (3 pregnant) and one buck to establish and maintain a purebred herd. When Pence disbursed his herd in 1941, Esther Oman bought some of these animals and their descendants. The Fairplay and Patterswiss lines trace back to Oman’s herds. 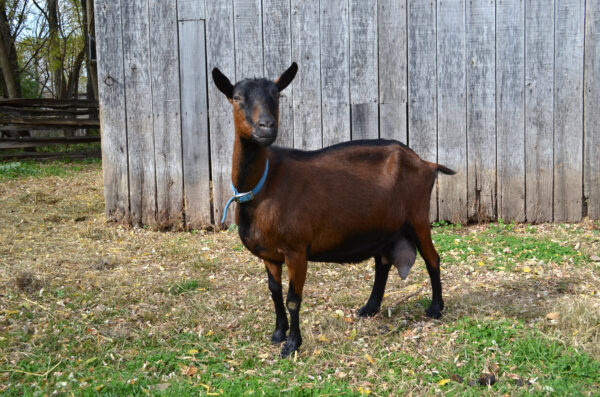 The breed was initially called the Swiss Alpine. Its registrations were included in the Alpine studbook, and its genetics contributed to the Alpine breed. In 1977, the name Oberhasli was adopted, and registration records were separated from the Alpines. This evolution of the breed’s name and identification has been one reason that its population in the US has remained fairly small.

The breed’s color pattern is called chamoisée, although in some cases, due to a recessive gene, an Oberhasli goat’s coat can be pure black. The solid black coloring is only accepted in Oberhasli does, not in bucks. The chamoisée color ranges from light tan to a deep reddish brown with black points; the reddish bay color is the most desirable. Both Oberhasli bucks and does may have a scattering of white hairs in their coat, with the bucks usually having a greater proportion in their coat than the does. Two black stripes from the eyes to the black muzzle give a distinctive facial appearance. The forehead is nearly all black, and black stripes run from the base of each ear to a point just behind the poll and continue along the neck and back to the tail as a dorsal stripe. The Oberhasli has a black belly and light gray to black udder. These animals have upright ears, which are straight and point forwards Generally the bucks have more black on their heads than the does. The legs are black below the knees and hocks and the ears are black on the inside. The Oberhasli face is straight or dished with no evidence of a Roman nose. The breed is well known internationally, and it is relatively numerous in Switzerland.

Oberhasli does are good mothers. They may only produce 1 kid at their first breeding, but after that will produce up to 4 kids per breeding. This breed has its highest milk production at about 1-1½ months after kidding. They don’t frighten easily and are not difficult to milk so are a good breed to use to learn the process.

Oberhasli does can produce up to 2,000 lbs. of milk over 265 days, although the average is around 1,650 lbs. The Oberhasli Breeders of America has recorded even higher yields. Oberhasli milk is described and fine and sweet, with some feeling it is the goat milk that tastes closest to cow’s milk. In Italy, Oberhasli milk is used fresh and to produce cheese, yogurt, and ricotta.

While does are a dependable source of milk, bucks and wethers are also useful as pack animals thanks to their strength and calm demeanor. Some goat packers prefer Oberhaslis because they are believed to be less fearful of water and various trail obstacles compared to other breeds.

They are usually healthy although they are prone to infection in damp/humid weather, so they need to be monitored in these conditions. However, as numbers have increased, breeders have been able to select for stronger, hardier animals.

The breed needs plenty of space to roam and secure fencing as they are “escape artists” and bucks may damage fence posts with their rubbing.

This is a good breed for novice goat owners as they can be used for exhibition, milk, and pets.

Notes:
Record is 4,665 lbs of milk per year, Less fearful of water and trail obstacles than other goats, Does can be pushy with each other