Temperament:
Docile, or Competitive and Aggressive

The New Hampshire is a relatively new breed, less than 100 years old. It was developed in New Hampshire and Massachusetts and is a separate strain of the Rhode Island Red. In the early 1900s, New Hampshire poultry breeders began to select hens from Rhode Island Red strains that feathered, grew, and matured faster. The breakthrough in the creation of this breed was made by Professor “Red” Richardson, who was working at an Agriculture Experimentation Station at the time. 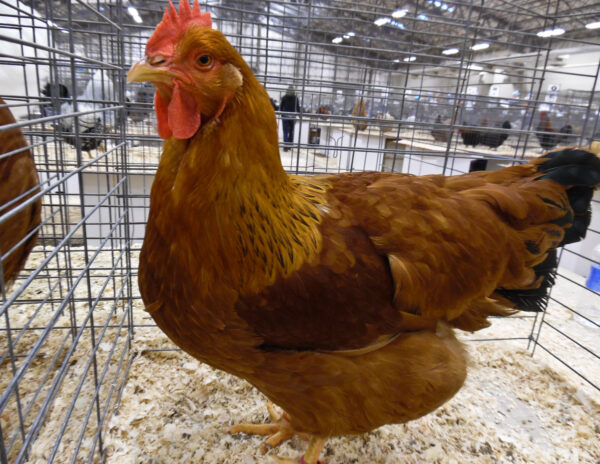 Due to the intensive selection, a different breed emerged and was named after one of the states where it was developed – New Hampshire. The breed was admitted to the American Poultry Association Standard of Perfection in 1935.

Chickens were an important source of protein during the second war, and after the war there was even a greater demand for poultry meat. In response, New Hampshires were promoted in the “Chicken of Tomorrow” contests that became popular in the US in the late 1940s. Although the New Hampshire birds didn’t win these contests, they were one of the first breed used to establish the broiler industry. They were also used in the development of the Delaware chicken.

In 2018, a petition organized by the Canaan Elementary Schools was presented to the governor of New Hampshire asking to make the New Hampshire the official state bird; it was signed into law that same year.

The New Hampshire has a more triangular shape than the Rhode Island Red. They have a deep, broad body, feather rapidly, and are prone to go broody, so they make good mothers. They are a dual-purpose breed, laying about 200-220 large, tinted eggs a year. Some strains lay eggs with a dark brown shell color.

They are red, but closer to a chestnut than mahogany, and they may have pale yellow highlights – though the sun can bleach out the feathers to an even lighter shade. Most pin feathers are a reddish buff or salmon in color and, therefore, do not detract from the carcass appearance. Roosters have black tail feathers, and hens may as well. Hens may also have black tipping on their neck and wings. There is also a white variety that is now very rarely seen.

Their eyes are orange, and their beak is a reddish/horn color. The comb is single and medium to large in size; in the females it often flops over a bit. They have clean shanks and four toes which are yellow; there is a reddish line that runs from shank to toes. Their skin is yellow. Males weigh about 8.5 lbs. and hens 6.5 lbs.

They are sometimes used to create sex link chickens.

Although the New Hampshire is usually a family-friendly chicken and good for beginners, they can be food-competitive with other breeds. Their temperament can vary from gentle and docile to unfriendly and aggressive, so be aware of the temperament of your source stock and handle chicks to get them used to people! They may be assertive with more docile breeds, and roosters should be kept away from children during the breeding season. They do well in both cold and warm climates if housed appropriately.

There are two kinds of New Hampshires – traditional/heritage and production. Be sure that you ask what type you are getting if you want a heritage strain!