The Nankin is an ancient poultry breed that’s thought to be one of the oldest known true bantam chickens. The bird’s initial origins are obscured as they go back beyond any known records, although it is likely that they originated in Southeast Asia, and were named for the ancient Chinese inland seaport of Nanking (now Nanjing), located on the Yangtze River in the east-central part of the country. There is evidence that the Nankin arrived in England prior to the 1500s with speculation that it may have been present well before then. 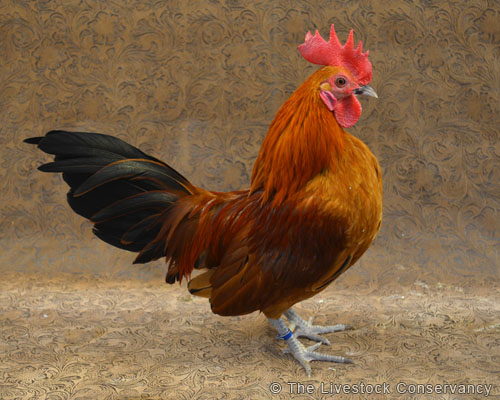 Once a popular and numerous breed in England, Nankins began to decline in numbers during the “hen fever” craze in the mid-1800s. Chicken fanciers began shifting their attention to the creation of new and exotic breeds causing the populations of older breeds to diminish in numbers.

The Nankin still played an important role and was used in the development of numerous bantam breeds, such as the Sebright. The breed was more importantly recognized for its usefulness as a brood chicken – a broody hen used to hatch pheasant, quail, and partridge eggs. Nankins were often kept on game farms in England for this purpose and continue to provide this valuable service for small farms today.

Nankins are known for the rich chestnut color of their bodies. Hens are a light chestnut color with the end of their tail feathers being black. Males tend to be darker in color with a black tail and black flight feathers, and they have the long sickle feathers common in roosters. The breed can be found with rose combs or single combs, with both varieties having bright red wattles, faces, and earlobes, and light horn-colored beaks. Legs should be slate blue, though white leg color will occur. White leg color is considered a fault and occurs because of a hidden recessive gene in the males. Males weigh 24 oz. and females 22 oz.

They lay about 80-100 small white eggs a year starting when they are about 24 weeks old. The Nankin has good egg fertility and hatchability if hens are allowed to incubate. Their eggs tend to be round in shape, similar to those of other bantam breeds. This can lead to hatching problems for the chicks when artificially incubated, and care needs to be taken to prevent loss. After hatching, the hardy chicks grow quickly to maturity and are easy to rear.

They like to roost in high places and will fly as high as they can in the evening, so they would appreciate high roosts in their coop. They do not mind confinement, and due to their size, do best in a covered area, like a chicken tractor, to forage. Because the single comb variety is prone to frostbite, Nankins are not the best choice for northern climates.

Nankins have a calm disposition and likable personality; however, the cocks will run to the defense of a hen if she calls out in distress. An unusual behavioral characteristic of the breed is their tendency to stay very close together as a group with individuals rarely wandering far from the rest of the flock. This behavior serves them as a defense mechanism, especially when kept with larger fowl. The diminutive Nankin cannot compete for food with bigger chicken breeds living in the same area, so they tend to wander on the outermost edges of a foraging territory. By grouping together, their chances for survival greatly improve.

Their friendly, happy disposition makes them good pets, and they are a great breed for responsible children.