Use:
Meat, Some Cashmere

The goats of this breed have a host of names: Myotonic, Tennessee Fainting, Tennessee Meat, Texas Wooden Leg, Stiff, Nervous, and Scare goats. The names refer to the animal’s myotonia congenita, a condition in which the muscle cells experience prolonged contraction when the goat is startled. The transitory stiffness associated with these contractions can cause the goat to collapse. This is not a true faint, but a muscular phenomenon unrelated to the nervous system. The degree of stiffness varies from goat to goat, with some showing a consistently stiff response and others exhibiting stiffness only rarely. 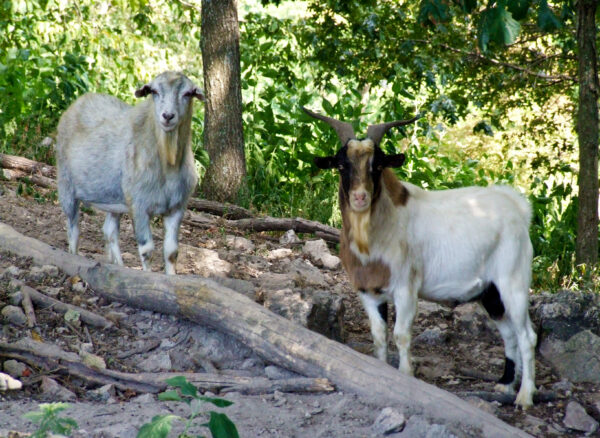 The breed’s history can be traced back to the 1880s. An itinerant farm laborer named John Tinsley came to central Tennessee, reputedly from Nova Scotia. Tinsley had with him four unusual, “Stiff” goats. The goats and their offspring were purchased from Tinsley by his employer, Dr. Mayberry. This type of goat gradually became known across the region. They were less apt to climb fences and escape from pastures than other goats, and their muscular conformation and high reproductive rate were also valued. Farmers began to appreciate them, and the numbers of “Stiff,” “Nervous,” or “Fainting” goats increased. During the 1950s, some Tennessee Fainting goats were taken to the hill country of central Texas where they were further selected for meat qualities, including larger size, and came to be known as “Wooden Leg” goats.

In the late 1980s, both the Tennessee and Texas branches of this breed were rediscovered. The renewed enthusiasm for the goats produced two types of breeders. One group focused on the historic tradition, emphasizing the meat qualities of the animals and selecting for growth rate, conformation, and reproductive efficiency. The other group selected for extreme stiffness and small size, promoting the breed as a novelty animal.

Myotonic goats are consistent in their unique type and style. The facial profile is usually concave to reasonably straight, and the eyes and forehead may bulge somewhat. The ears of these goats are medium-sized and usually held horizontally; they are larger and more horizontal than Swiss breeds, but smaller and less drooping than Nubian or Spanish goats, or Boer crosses. Ears may have a wave or ripple about half-way down the length of the ear, though some breeders choose stock that lack this feature.

Most goats are horned, and horns vary from large and twisted to small and simple. Others are polled, and some breeders select specifically for this trait.

Coats range from very short and smooth to very long and shaggy, and these variations may be found in all, including old foundation, strains. While most of the goats have short hair, the shaggy goats are more resistant to inclement weather and may be selected for this trait. Some goats even produce cashmere fiber.

Tennessee Fainting goats are found in almost all known goat colors although breeders may select for a limited range. Black and white coloring is very common as it was favored by early Tennessee breeders. However, as unique color variations naturally occur, kidding season is always exciting. Because does like to keep their offspring hidden for a few days, looking for these multicolored kids can be like searching for Easter eggs.

Does are quiet, good mothers, are prolific, and may have a nonseasonal breeding season. Some even bear kids every six months, and most regularly produce twins or triplets and have plenty of milk to raise them, although four or five kids may need to receive supplemental feeding. Generally, Myotonic goat kids are vigorous and begin nursing shortly after birth.

As a landrace breed, Tennessee Fainting goats were always variable in size. This variability, emphasized by recent selection, has given rise to a population that can range from 60 to 175 pounds. Heavily muscled conformation, due to the myotonia, is consistent among these goats, and makes them a good choice as meat producers as these goats have more muscle/weight than other goats. Studies at Virginia State University show that meat to bone ratio is about 4:1 while it is about 3:1 in other breeds. Their meat is considered tender and tasty, ranked at the top of meat quality when compared to meat from other goats. The tenderness appears to be a result of the stiffness exhibited because of their myotonic genetics.

Myotonic goats are active foragers, but the myotonia limits their climbing, jumping, and stress on fencing and the landscape, so they are popular with small farmers as they are easy to contain. They are also reasonably parasite resistant.

The Tennessee Fainting goat is popular for its combination of meat traits and reproductive efficiency, and it is increasingly recognized as an important genetic resource as they are a uniquely American breed. They are being used both as purebreds and for crossing with other breeds. While crossbreeding can demonstrate the genetic value of the Tennessee Fainting goat, overuse of purebred does for crossing can threaten the survival of this unique and important goat breed.

The Myotonic goat has much to offer a beginning to experienced farmer as a well-adapted goat for low-input forage-bases systems, delightful pets, and exhibition animals.