Characteristics:
Not good in cold weather; needs plenty of exercise

Modern Game Chickens originated in England from crosses of Malay and Old English Game chickens due to the ban on cockfighting in 1849; fanciers began showing their birds instead of fighting them. Gradually, the show world made certain traits desirable – tall birds with hard feathering were needed if an exhibitor wanted to win top prizes. Around 1870 they began to be called “Exhibition Game.” At this point they were about half as tall as the birds we see today. 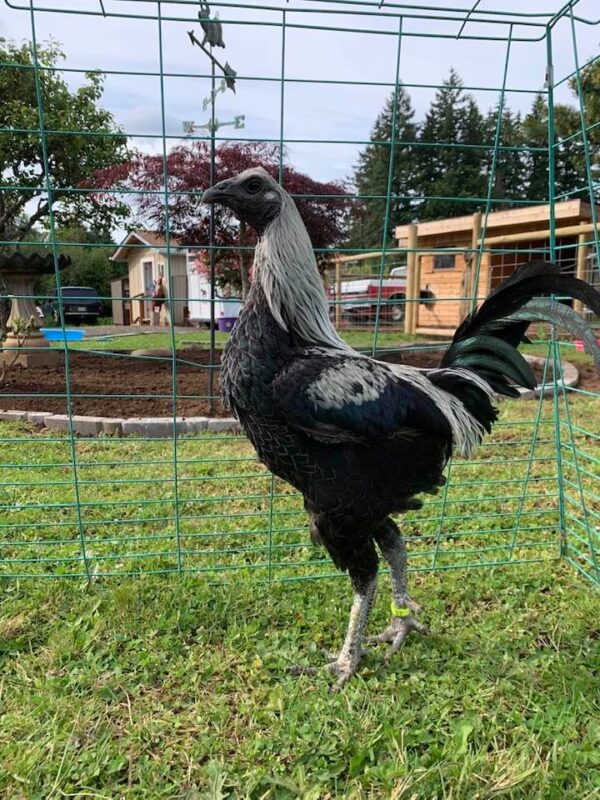 Beginning in the 1880s, some began to use the name “Old English Game.” The breed grew in popularity, but fanciers had different preferences. Some thought that the birds should not be as tall as they had become, so they began to form their own clubs for breed varieties that eventually included the Carlisle Old English Game and the Oxford Old English Game.

By 1910, the breed was called “Modern Game” and a Modern Game Club had been formed by fanciers. The birds were tall and sleek, had hard feathering, looked much like today’s type – and were being sold for high prices.

Unfortunately, the Modern Game is an exhibition and ornamental breed; they are not known for meat production and lay few eggs. So, over the years they have waned in popularity.

The breed was included in The American Poultry Association’s Standard of Perfection in 1874.

Modern Game bird comb and wattles vary from red to mulberry, depending on their feather color. Males are often “dubbed” (have their comb and wattles removed) to highlight their long, slim shape. Their skin color is white. Males weight 6 lbs. and hens weight 4.5 lbs. They are about 22 inches tall.In the US, the standard version of these birds comes in 9 different colors with either black legs and dark eyes or yellow-colored legs and red eyes. They are slow maturing and need a lot of exercise to maintain muscle tone.

Modern Game chickens make excellent pets for adults, and are easily tamed, but they should be monitored with children. They are calm, easy to maintain, and are an interesting addition to a backyard flock. They do not tend to scratch as much as other breeds. They are an active, noisy breed. They don’t like confinement and prefer warm climates. If they are kept in a mixed flock, they tend to be loners.

Characteristics:
Not good in cold weather, needs plenty of exercise