The origin of the Minorca chicken is not known. They may have originated in Africa and were taken to Spain by the Moors, as it was sometimes referred to as the “Moorish fowl”; or they may have been taken from Italy to Spain by the Romans. In any case, the Minorca breed takes its name for the Island of Minorca off the coast of Spain in the Mediterranean where they were once found in large numbers. Fowls of this type were also widely distributed throughout the region known as Castile, the tablelands north of Madrid. 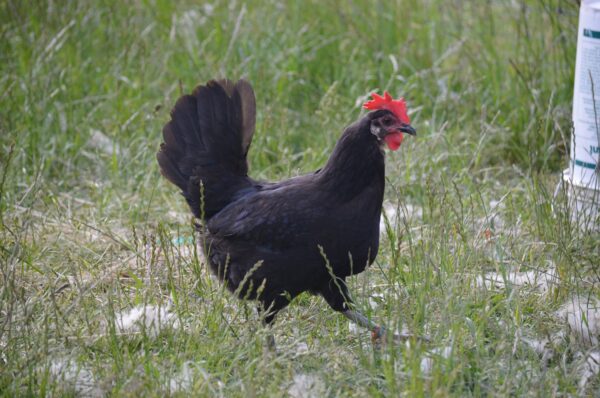 Minorca are imposing birds with large, beautiful, full tails and muscular legs. Single-comb males have a large, upright, six-pointed comb with middle points the largest. Females also have six points with the first point falling over the top of the beak and the other five flopping on the other side of their head. Rose-comb varieties have moderately large combs with small, rounded points. They have large, white earlobes that may spot and scab as they age, and the white color may spread to their faces. The Black variety has medium-length, dark slate, stout shanks, black beak, dark brown eyes. The White and Buff varieties have reddish-bay eyes, pinkish-white shanks and toes, and a pinkish-white beak. Males weigh 9 lbs. and females weigh 7.5 lbs.

They are not broody, but good layers of very large white eggs – possibly the largest white eggs of any of the white-egg-laying breeds – at a rate of 140-220 per year (depending on the strain).

Minorca chickens are the largest chickens in the Mediterranean class. They have a large carcass size with a market weight of 6.5-7.5 pounds, but their meat is said to be very dry. Homesteaders typically overcame this problem by stuffing the birds with lard (“larding”) before they roasted them. They can also be used as stew birds.

The breed has proven excellent on all soil types. They thrive in heat and but don’t do as well in colder weather as they are prone to getting frostbite. They are flighty and can fly if they feel the need. They can tolerate confinement, but they do not like to be confined, preferring to forage. They are very hardy and rugged and good at evading predators. They can fly. Although they are not aggressive, they tend to be flighty, and they do not make a good bird for children. They are not cuddly but can be trained to be friendly with humans – although they are not the best breed if you want chickens as pets.