Notes:
Not recommended as livestock guardians due to their small size; intact jacks generally should not be kept by novice owners who do not have experience with intact equines and/or those who do not intend to breed them

Miniature donkeys originated and have been valued in the Mediterranean region for over 2,000 years. They were used as draft animals to carry firewood, deliver fresh bread, pull oar-filled carts from mines, for transportation, and to power grist mills to grind grain. Donkey milk was also used as a curative and for skin treatment. It is said that Poppea, wife of the Roman emperor Nero, kept a herd of jennets to produce milk for her baths!

Miniature Donkeys were first imported to the United States in 1929 by Robert Green, a New York stockbroker. He bought seven Sardinian donkeys, sight unseen, while on a trip to Europe and sent them to his stud farm in New Jersey. Three of the females were lost to a dog attack shortly after they arrived, but one of the surviving Jennets, “Miranda”, was bred to the jack “Impheus” and produced the first Miniature Donkey born in the United States, “Christopher Columbus.” These donkeys appear in the pedigrees of some of today’s Miniatures. 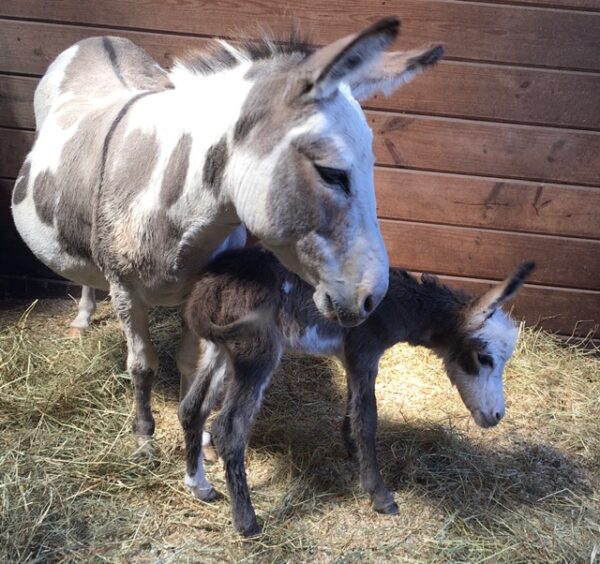 Later imports by August Busch, Jr. of the Busch family (of Busch/Budweiser Beer/Clydesdale fame, with a herd name of “Belleau”), Powel Crosley, Jr. (Crosley Motors), and others increased numbers somewhat, but it wasn’t until the late 1930s that the breed became widely known and available to the general public in North America. The Miniature Donkey Registry was formed in 1958 and is now operated by the American Donkey and Mule Society. The National Miniature Donkey Association was formed in 1990 to promote the breed and educate breeders about its stewardship.

Miniature Donkeys have curious, engaging dispositions, and make great pets. A donkey’s first instinct when alarmed or confused is to stand still. This cautious approach, frequently mistaken for stubbornness, can be a great asset, especially around children.

Donkeys average 34″ high at the withers, with 36″ the maximum height allowed in the breed. Donkeys that measure over 36” are no longer considered Minis, and are usually measured in hands like standard donkeys. They weigh 200-350 lbs. Their hooves may turn outward so they are “cow-hocked” – a feature of draft animals that can help better distribute their weight. Gray dun with a dorsal stripe is the most common color, although black, brown, sorrel, white, and spotted animals also exist.

They do well on grass or grain hay, but alfalfa is not a good option because they do best on a high fiber/low protein diet. If they are overfed, they can founder. They need regular hoof care and worming and the same vaccinations as horses.

Although donkeys are often recommended as livestock guardian animals, Miniature Donkeys are not a good option because of their small size – they may not be able to defend their charges at the same level as their larger cousins. Therefore, they make a better secondary guardian animal than the primary one.

Intact male donkeys do not make good pets and generally should not be kept by anyone who does not have experience with intact male equines and does not plan to breed. If you want to have a pet donkey, the best choice is a female or gentle gelding.

North American breeders have selected their donkeys to be small-sized companion animals, and the market has rewarded such selection. At the same time, the breed’s thrifty nature, long life span (25-35 years), and easy-keeping qualities reflect its past as a sturdy work animal. The National Miniature Donkey Association is encouraging broad-based selection that includes soundness, fertility, and other performance qualities to conserve the breed’s complete genetic heritage.

North America boasts 10,000 to 15,000 Miniature Donkeys with numbers increasing. However, numbers in the Mediterranean region are decreasing because these small working donkeys are being crossed with larger breeds. For this reason, the donkeys in North America hold global genetic value and merit continued stewardship from breeders in the US and Canada.