The Chinese have been selectively breeding domestic swine for over 5,000 years. The Meishan is one of the oldest, if not the oldest, domesticated breed of pigs in the world and is part of the Taihu group of Chinese pigs, named after the lake in China’s Jiangsu province. 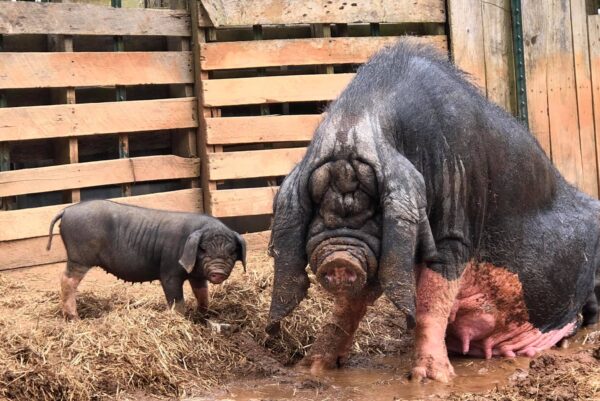 Taihu pigs are prized in China and Japan for their succulent marbled meat and superior lard and fat quality. The Meishan is considered a medium-sized lard carcass hog, however, there were originally three sub-types known as the “small,” “middle,” and “large.” Of the three types, only the small and middle remain today. The two types are managed as separate breeds on conservation farms in China. In the U.S., only the middle type exists. Meishans were bred for hyper-productivity and prolificacy and to thrive in smaller areas and on rougher diets than other pig breeds. In conjunction with these traits, Meishans have been bred to be extremely quiet, docile, and sedentary, making them easier to manage than larger or more active breeds. Meishan litters by their third litter are typically in the 14 to 16 piglets range with litters occasionally hitting 20 or more. A sow in the USDA research herd once farrowed 28.

Meishans were first imported into the U.S. in 1989 after ten years of negotiations with China. They were brought in as part of a joint study between the USDA, Iowa State, and the University of Illinois. Only 99 Meishans were imported and were equally divided – both by sex and genetic profile – between the three participating research facilities. This marked the third, final, and largest exportation of Meishans allowed by China in modern times. Other exportations were significantly smaller and those went to France and England. Meishans were imported specifically to be studied for their hyper-productivity. In addition to their large litters, they also enter puberty at approximately 90 days. Significantly faster than most domestic hog breeds. Sows typically have 16 to 18 teats or sometimes in excess of 20, allowing them to easily raise large litters of piglets. They’re excellent mothers and, in study herds, had higher weaning to farrowing ratios than conventional breeds. Meishan piglets are interestingly born with more highly developed digestive systems than conventional swine. This is believed to make the piglets more resistant to digestive diseases of piglets and allows for earlier weaning of piglets.

Unlike most pig breeds, Meishans thrive on a diet higher in fiber and roughage. They’re known to be an extremely docile and sedentary breed. They’re also thought to have a lower environmental impact on pastures compared to other heritage and commercial swine breeds.

Under the agreement between the USDA and China, Meishans were restricted to use in research facilities or zoos until the prolificacy experiments were concluded. Iowa State dispersed its herd between 2008 and 2010. The USDA and the University of Illinois dispersed their herds entirely in 2016. None of the original research facilities currently maintain Meishan herds. It’s important to point out that the three research herds spent over 20 years in total genetic isolation from one another and none were interbred until pigs were in private hands beginning in 2016.

An association was developed for the breed and is known as the American Meishan Breeders Association (originally incorporated in Tennessee in October of 2016). The AMBA holds the herd book and registration services; recognizing foundation pure stock by using a documented chain of custody back to one of the three research herds. It also allows for grade “pure on appearance” females only. Percentages of bloodlines are tracked and COI is available on animals with at least a three-generation pedigree. The AMBA utilizes a breed description and tracks litter sizes as a performance criterion.