Characteristics:
Very heat tolerant; tallest of all chickens; can be broody

When you think of ancient landrace breeds of poultry, one is literally heads above the rest – the Malay chicken that stands as tall as 26 to 30 inches. Malays were said to be able to eat grain from the top of a barrel or dining room table! The breed achieves its great height from a combination of its long neck and legs, and the upright carriage of its body. 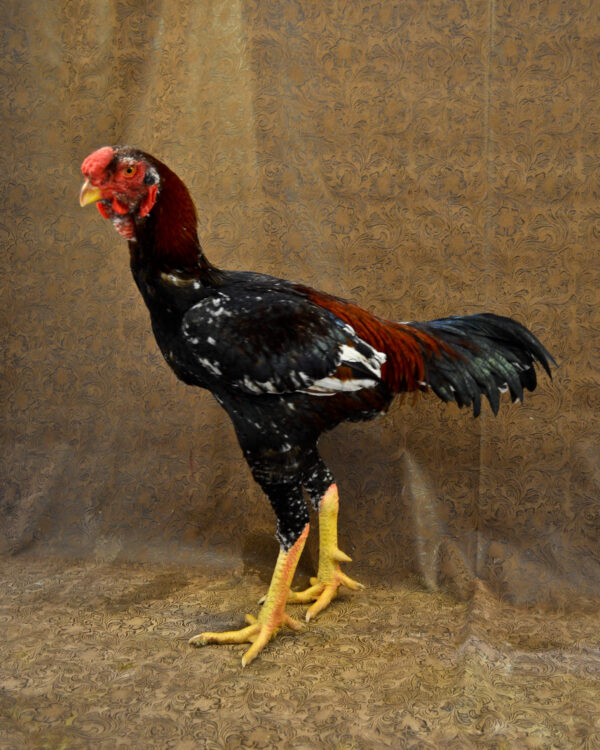 When Europeans first encountered them, Malay chickens were widely distributed throughout Asia, particularly from north India to Indonesia and Malaysia. The breed was unlike any other previously known, with its extreme height, heavy bones, broad skull, short-stout beak, and pugnacious nature. The Malay, like India’s Aseel chicken, is an extremely ancient breed; it is believed to have descended from the great Malay, or Kulm, fowls in India. The Aseel breed dates back some 3,500 years, but it is not possible to know which breed is older.

By 1830, the breed had been brought to England where it became fashionable to include them in poultry collections. By 1834, Malay chickens could be found in Holland and Germany and they traveled to America 12 years later.

The Malay chicken was the first of the gigantic Asiatic fowl introduced to the West. The breed’s unique appearance attracted attention, but it was found wanting as a general breed. Historically, as a meat-producing fowl, the Malay had as many detractors as followers. Some criticized the meat as being coarse and dry, while others extolled the firm grain and large amount of meat the breed produced. The Malay tends to be lean – a benefit in tropical climates – and doesn’t lay fat on the breast.

The Malay chicken was first recognized in the American Poultry Association Standard of Perfection in 1883 in the Black Breast Red variety. The White, Spangled, Black, and Red Pyle Malays weren’t recognized until 1981.

Over the many years since the Malay was first discovered, its most useful role has been for crossing to create other breeds. Many breeders have used the breed to regenerate lines of other Asian fowl – from Games to Longtails – where it seems to impart strong vitality.

The Malay chicken has many unique attributes. The crow of the cock is hoarse, short, and monotonous – reminiscent of a roar. It has small wattles and is inclined to be bare on the throat and breast. The comb is low and thick and strawberry in shape. The yellow beak is short, broad, and hooked. The expression of the Malay is snaky and cruel – its pearl eye color and overhanging brows contributing greatly to this feature. They have a small red walnut comb, wattles and earlobes. Feathers of the Malay chicken tend to be very close to the body, lacking fluff, and are firm, narrow, and very glossy, with a lustrous sheen when viewed in daylight. The legs are yellow with remarkably large scales. Males weigh around 9 lbs. and hens 7 lbs.

The personality and character of Malay chickens are unique as well. They’re quite quarrelsome, which only gets worse in confinement. The breed is prone to eating each other’s feathers. Though the females are good mothers, the males can be cruel to their chicks. While chicks can be quite delicate, adult Malays are very hardy. The breed’s gait is heavy and they tend to rest their shanks on the ground when tired – often standing taller than other breeds while doing so. Hens are poor and seasonal layers; they brood well, but with their short, narrow, tight feathers, they can’t cover many eggs. Depending on the strain, they can lay from 20-100 medium brown eggs a year.

They do not do well in confinement as they are too large and need a lot of room to roam. Their coop will have to be large enough to accommodate them, and as they can fly, any area in which they are kept should be covered. They are better in warm climates than in cold.

This is not a good breed for a first-time owner nor if you want a cuddly pet. Although they can be friendly with humans and even protective of them, they are not good as part of a mixed-breed flock due to their aggressive nature, and they are not ever a good breed for children. When confronted, they have a “fight” rather than a “flight” response.

If you want a Malay, be sure to buy from a reputable source so that you get the true breed and not a cross bred to look like one.