Although the exact origins of the Leghorn breed are not known, they likely were developed from one of the small landrace chickens in the Tuscan region of northern Italy. These Livornese (“from Livorno”) chickens were small but laid very many eggs and did not need much food.

The name Leghorn is an Anglicization of Livorno, the Italian port city from which these birds were first exported to America around 1828, and again in 1830-31. The white variety was originally called “Italian Fowls” or “White Spanish”, and were described in the “Poultry Bulletin” in 1881 as being “…white with disproportionately large combs and as precocious layers.” Brown Leghorns were imported by Mr. N.P. Ward around 1835. He bred some and gave some to fellow fanciers, but these birds seem to have disappeared before the next importation. 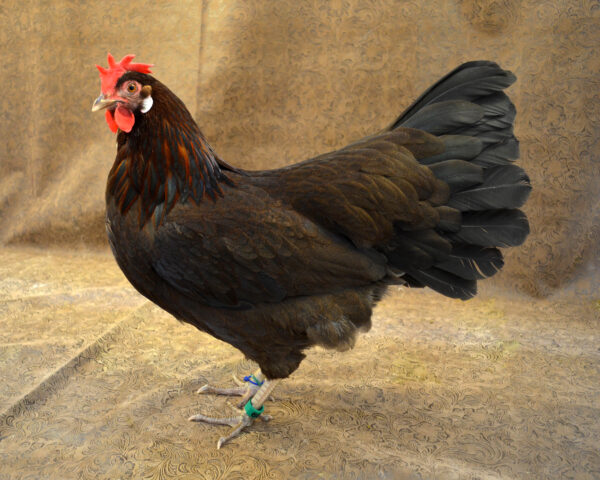 In 1852, Captain Gates arrived in Mystic, CT with the first importation of Leghorn chickens that are direct ancestors of today’s non-industrial flocks. The birds were what we now call Brown Leghorns. In 1853 F.J. Kinney received an importation of Brown Leghorns at Boston Harbor, while a Mr. Simpson received a shipment of White Leghorns.

American fanciers began to breed with more attention to color and refinement, including breeding for a rose comb; a White Leghorn won the New York show in 1868. It was around this time that the Leghorn began to be popular as an egg-laying breed. From this point forward Leghorn chickens began to win America’s heart.

White Leghorns were imported from America to England by Mr. Tegetmeier around 1870; Lewis Wright imported Brown Leghorns in 1872. English breeders embraced the breed for its excellent laying ability, but they did not value its small appetite and smallish size, so they crossed them with Minorca chickens to increase the breed’s size making them much closer to a dual-purpose farm fowl.

During the early part of the 1900s, fanciers were concerned with beauty as well as production. The Leghorn, with its spritely carriage and long flowing curves and tail, certainly resembles a living work of art. But soon a rift in the poultry industry occurred. There quickly formed two camps of thought – those who believed production was the only measure of worth, and those that believed form and function should be maintained together.

Beginning in about 1910, hybridized English Leghorns that came back across the Atlantic to America helped fuel the transition of farm fowl to the commercial poultry industry. Today a majority of Leghorns are of the industrial type and dominate white-egg production in America. The remaining non-industrial Leghorn chickens, which more closely resemble the original Italian imports, are in the hands of small breeders all across the country and still retain their foraging and productive nature.

Non-industrial Leghorn chickens come in a variety of colors. They can have a red rose or large single comb, red wattles, white earlobes, orange or red eyes, yellow beak, skin and clean legs. They have four toes and can have spurs. Their body is more game-bird like in appearance, with a narrow breast and upright stance. Males weigh around 6 lbs. and females 4.5 lbs.

They are an egg-laying breed that can produces between 150 and 320 large to extra- large, white eggs a year. However, because they are such prolific layers, the average life span of a laying hen is only 4-6 years. They are not broody and aren’t the best mothers.

Some Leghorn strains are known to be flighty and easily startled. They can fly. They are busy, active chickens who prefer to hunt and scratch, and have no preference where – be it a compost heap or your flower garden. If there is scratching to be done, Leghorns are the chickens for the job. Although they can tolerate confinement, they can become bored if kept in too small and area, so they ideally need plenty of room to roam and a large coop with activities they can do while confined. Non-industrial Leghorns are not aggressive by nature, but if you want a mixed flock, they should be kept with breeds with similar temperaments rather than more docile breeds. They are both cold and heat tolerant, though the rose-comb variety is better suited for cold locations as the large single comb is prone to frostbite.

They are not a good breed for children or as a first breed for beginners who want “pets” that they can cuddle. They are noisy, so they are not good for an urban or suburban neighborhood.

The breed does offer many wonderful attributes for the right situation: high rate of egg production; high level of fertility; hardiness; vigor; easily raised chicks that feather quickly; and the ability to be raised on almost any type of soil. On range they are splendid foragers and small eaters. Indeed, it is the combination of hardiness, rate-of-lay, and small appetite that about 1870 turned American poultrymen’s heads and won the Leghorn chicken lasting popularity.