Characteristics:
Good foragers; can be flighty

The history of Lakenvelder chickens is a bit clouded, but reveals an ancient lineage. While it may be true that the Lakenvelder chicken as we know it was developed in Holland and Germany, it’s also true that its ancestry is much older. Around 2,000 BCE, there was an immigration of Indo-Aryan wise men who, upon arrival in Mesopotamia, became known as the Holy men of the Brahmaputra River, or Ah-Brahman. These men from the Indus Valley brought with them the first domestic chickens. Some of the Ah-Brahman settled in Palestine in the city of Armageddon (also known as Tel Megiddo) where they breed their fowl, valuing it primarily for the crow of the roosters and, later, for eggs. 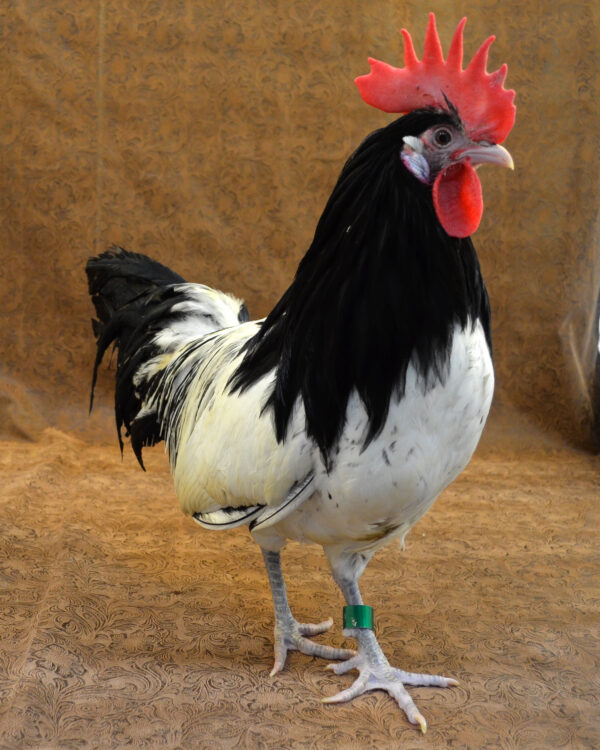 One of the first people groups to incorporate chicken eggs into baking were the Semites who created the bagel. Around 1 CE, Jewish immigrants to Holland and Germany brought with them their Tel Megiddo chickens. So it is then that the ancestors of the Lakenvelder chicken arrived in Europe.

The breed may have been developed in southern Holland, just over the German border. The Dutch painter Van Gink wrote that as far back as 1727, the breed could be found near the village of Lakervelt in the southeastern corner of Holland. The breed’s first appearance in poultry shows was in 1835 in West Hanover.

By 1860, Lakenvelders were well known and bred in Westfalen and in the Northern part of the Rhine province. The breed was first shown in England in 1902 shortly after their arrival in the country. Although the breed arrived in the US around 1900, they weren’t admitted to the American Poultry Association’s Standard of Perfection until 1939.

Also known as “Shadow on a Sheet,” Lakenvelder chickens are as beautiful as they are useful. In Dutch, their name translates to ‘white spread over a black field;” with “laken” meaning sheet and “veld” meaning field. This is a wonderful description of these stunningly white birds accented by their black hackles and tails. They also have a black inner web on their primary and secondary feathers, and a blue-gray under color. It usually takes until the third molting for the plumage color and markings to fully appear. They have white skin and their breast is similar to that of a game bird – round and plump. They have medium-length slate shanks, slate toes, rather short thighs, deep red eyes, dark horn beaks, and medium-size, single red combs.

(There are also Lakenvelder cattle – called Dutch Belted and also on The Livesock Conservancy’s conservation priority list – and Lakenvelder goats that have a similar black and white pattern and are from the same area.)

Lakenvelder chickens were developed as meat and egg producers, although today they would be considered average. They lay about 150-200 small/medium white/tinted eggs per year. Hens are not broody. They are a small bird, with males weighing 5 lbs. and females 4 lbs., and though they are not plentifully fleshed, their meat is reputedly delicious.

They are great foragers, very active, and vary wary. Their active and wary nature is not unlike that of the Leghorn chicken breed. This breed does not like to be confined, which may be part of the reason for their decline in popularity. Confined birds are not happy and may contribute to their reputation of being flighty. They do well in most climates, but aren’t fond of cold weather, so they may be a little less flighty if they need to be confined in warm coop. Lakenvelders may also be dominant with more docile breeds of chicken.

If you want a people-oriented breed, you may want to look elsewhere. While some may be friendlier, greet family members, and be more “pet” like, it will depend on the individual personalities of the birds in the flock.

Characteristics:
Good foragers, can be flighty