It is said that the La Flèche chicken got its name from the arrow-like shape of its v-shaped comb because, in French, “la fleche” translates to “the arrow.” However, the name came from its geographic origin. La Flèche is a town in the department of Sarthe within the Pays de la Loire region of France, near the city of Le Mans. The name La Flèche was given to it by the Church of St. Thomas in memory of the arrow that martyred their patron saint. It is believed the breed was first developed in Le Mans during the fifth century, then Mizeray, and finally in La Flèche. Today in the farmers market of La Fleche, these birds are sometimes sold as the “Fowl of Le Mans.” 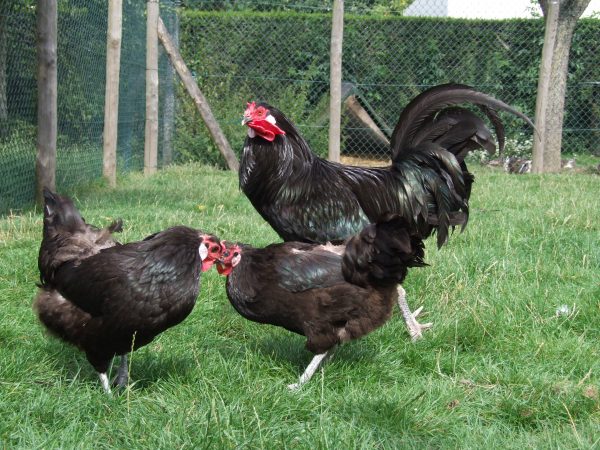 A large population of La Flèche chickens made their way to America in the 1850s. They were found by producers to be delicate in constitution, especially in the eastern and central states, and were soon abandoned for newly arriving, hardier breeds. Poultry author W.B. Tegetmeier purchased some La Flèche chickens and imported them into England in 1882. La Flèche chickens were recognized in the American Poultry Association Standard of Perfection in 1874.

The La Flèche chicken is a medium-sized, dual-purpose bird with black plumage (their only color variety) and a full, well-curved tail. They have medium-length, stout, dark slate shanks, bright red eyes, large nostrils, white earlobes, red face, and large red wattles, and a distinct v-shaped comb with no crest. They resemble Spanish chickens, except for their comb. The breed is deceptive in size – it is much heavier than its tight-fitting feathers make it appear. Males weigh 8 lbs. and females weigh 6.5 lbs.

The hens lay 140-220 large/extra-large white eggs from March through October. They are non-broody and considered to be poor mothers. La Flèche chicks grow fairly slowly, but the breed was famous for producing magnificent capons (castrated cockerels) and poulardes (fattened pullets) that were celebrated in the Paris and Anjou markets.

Of all the French chicken breeds, some feel that the La Flèche is the primary breed for table qualities. They have thin, white skin with tender, juicy, delicate, short-grained flesh. Their breasts are meaty and full in shape. The breed fattens well, with the fat distributed across the breasts, legs, thighs, and even the back. La Flèche chickens have a small proportion of offal (edible internal organs) to meat. They were also used to “gaver” or stuff – the old practice of making birds eat more by inserting a tube into their mouths to give them a specially blended wet mash to supplement their normal diet to fatten them.

This is not a good breed if you are looking for a pet chicken. They tend to be flighty and often prefer to avoid humans. They tolerate confinement, but prefer to free-range. If they are confined, they should have plenty of room to roam and explore to prevent boredom. They can fly, so a high fence is suggested if you don’t want them roosting in your trees. They prefer warm climates, and generally do not do well in the cold. They are not aggressive, and they can do well with other like breeds as long as there is no other rooster.