The Java is the second oldest breed of chicken developed in America. Its history before arriving in America is not certain, but its ancestors were reputed to have come from the Far East, some possibly from the isle of Java, in the first half of the 19th century. In any case, the breed was developed in America and known to exist in America sometime between 1835 and 1850, although it is possible 1835 may even be late for the breed’s development period. 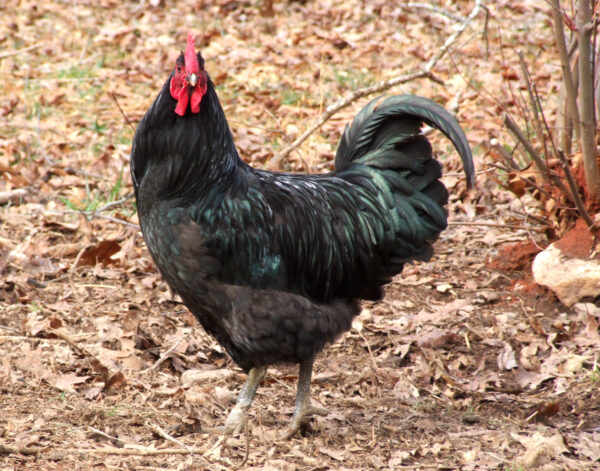 Javas did not reach Britain until 1885, and this is important as those who claim they originated in pure form directly from the island of Java cite England as their source of stock (from Java by way of England).

The Java was a popular homesteading fowl as it is a dual-purpose breed that does well as a free-range forager. While it has a slower in rate of growth than more modern breeds, in the mid-1800s, the Java was noted for its meat production. The Java breed was used to develop many other American breeds, including the Jersey Giant, Plymouth Rock, and Rhode Island Red. Unfortunately, these breeds later eclipsed the Java in popularity.

Javas come in four color varieties: Black, Mottled, White, and Auburn. The Black Java is noted for the beetle-green sheen of its feathers – a sheen thought by some to be more brilliant than that of any other black fowl except the Langshan. The Blacks have very dark eye color, from dark brown to nearly black, and black legs with yellow soles on their feet. All Javas have yellow skin. White Javas have yellow leg color.

Mottled Java feathering is black with splashes, or mottles, of white. They have very intense red eye color, and their legs should be a broken leaden-blue with yellow foot soles.

The White Java was admitted to the American Poultry Association Standard of Perfection, but was removed prior to 1910 as it was felt that the White Java and White Plymouth Rock were too similar.

The Auburn Java has never been recognized by the American Poultry Association, but is mentioned as a color sport of the Black Java in writings as early as 1879. It is most noted for its use in the development of the Rhode Island Red chicken breed.

Although the APA only recognizes the Black and the Mottled Java colors in its Standard of Perfection, White and Auburn Javas are being actively bred by a core of dedicated producers interested in bringing these colors back into the breed.

The body type is one of the most distinguishing features of Javas. They have a rectangular shape, much like the Rhode Island Red, but with a sloping topline. The back should be long – in fact Javas have the longest backs in the American Class. Javas have full, well-rounded breasts. Originally this breed, like the Buckeye and the Rhode Island, had tight feathers. Males weight 9.5 lbs. and females 7.5 lbs.

The single comb on all Javas should not have a point too far forward on the comb (the first point should be above the eye, not above the nostril). While this characteristic is of no economic value, it may be important in identifying the purity of the stock. It also points to a single-combed bird that was produced from pea-combed ancestors.

Java hens are broody and good mothers. They lay 150-180 large tinted-to-dark brown eggs each year, and well into the winter. Their average life span is 5-8 years, and they continue laying long after other breeds have stopped. Javas develop slowly but when mature, have a market weight of 6.5 to 8 lbs.

The breed is friendly and calm and seldom aggressive, though chicks may be a bit flighty. As such, they are a good breed for children. They are also amiable with other breeds of chickens. They can deal with being confined, but prefer to forage in large areas. Java hens do well in cold weather but some roosters that have larger combs may need to be protected from frostbite. They can thrive in both hot and cold climates if protected as needed from the elements. They tend to keep together in tight flocks.