Use:
Sport and Event Riding

Notes:
This breed is mostly used in riding and jumping competition

Irish Draught horses were first mentioned on record in the late 1700s. It began as a landrace breed selected for their ability to perform a wide multitude of tasks on farms while also being attractive but still athletic mount for fox hunting, and for simply looking good riding into town. They were developed as practical farm horses that could work the fields, pull wagons, and take on any task asked of them with gentle confidence. Heavier draft breeds popular at the time didn’t fare well in Ireland with its rough, wet terrain loaded with ample burrs and stickers that would cling to their heavily feathered legs. A lighter but equally strong horse was needed and the result was the Irish Draught. 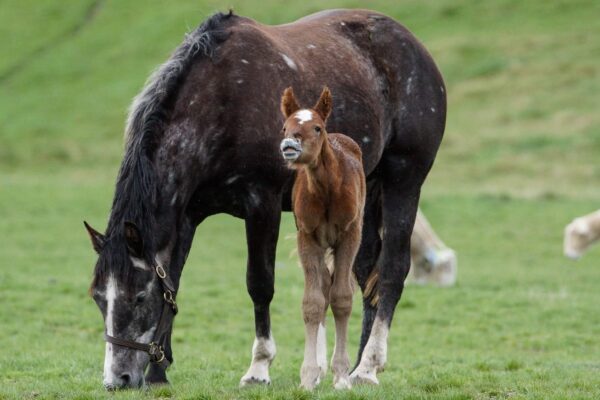 The breed’s origins can be linked to the smaller Conemara and Irish Hobbie pony breeds developed from the small horses the ancient Celts brought to Ireland around 500 BCE. These horses were combined with larger Norman horses and later with Spanish breeds and Thoroughbreds as they became more widely available in the country.

The Irish Draught was officially recognized as a breed in Ireland in 1901. During WWI, the breed’s popularity skyrocketed from the need for solid, easy keeping cavalry horses with comfortable gaits to help the war effort. The emergence of tractors and automobiles ultimately reversed the trend and numbers plummeted as the need for horses declined. Thankfully, the breed had another use in the production of fine sport horses known as the Irish Hunter or Irish Sport horse. When crossed with Thoroughbreds, they produced a highly athletic horse with solid bone which is crucial to the well-being of an equine athlete intended for fox hunting or to serve as hunter jumpers on a competitive level. Because of this quality, many purebred Irish Draughts are used for the creation of the more valuable sport horses resulting in very few purebreds being created at all. As of 2011, less than 8,400 purebred horses remain globally.

Irish Draughts can be found in many solid colors including grays. White on the legs above the knees or hocks not desirable and considered a fault. Stallions stand at approximately 15.3 to 16.3 hands and the mares 15.1 to 16.1hands. The horses are known for their extremely gentle dispositions and are a great pick for novice riders.

Use:
Sport and Event Riding

Notes:
This breed is mostly used in riding and jumping competition