Icelandic chickens originated in the Icelandic settlements of the tenth century Norse who brought their farmstead chickens with them. In Iceland, these chickens are known as Íslenska landnámshænan or “Icelandic chicken of the settlers.”

For a thousand years, the only chickens in Iceland were this robust landrace. The term “landrace” means that these chickens were selected all over Iceland for the same utilitarian traits, but not to conform to a specific breed standard. Over the centuries, selection favored birds capable of feeding themselves on Icelandic smallholdings, and hens with reliable mothering skills. The result was a landrace of active, naturally healthy fowl adapted to harsh conditions and with good egg production, even in winter 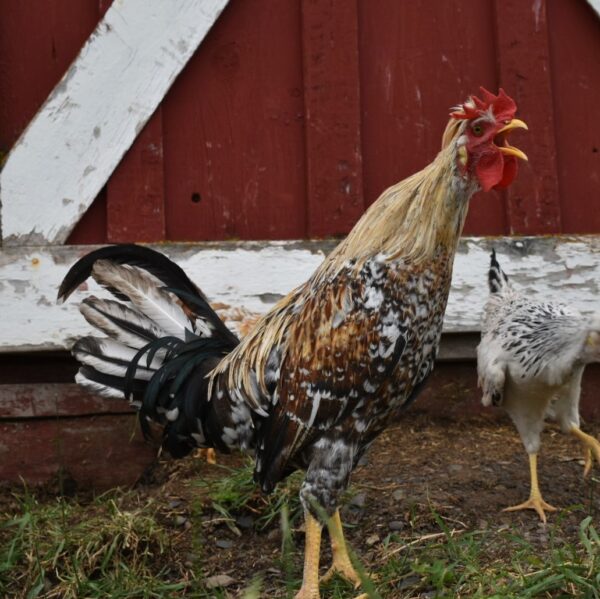 However, commercial chicken strains were imported into Iceland in the 1930s and were crossed with the native stock. This threatened the Icelandic’s breed’s survival as a pure landrace. In the 1970s, efforts in Iceland to conserve pure birds were followed by their exportation to other countries, including the United States. It is estimated that there are only about 5,000 pure Icelandic landrace birds internationally, and these trace back to those saved in the 1970s.

A 2004 British study of Icelandic chicken blood samples showed that 78% of the Icelandic DNA is unique and cannot be found in any other chicken breed in the world. Therefore, crossing with other breeds is discouraged, and the offspring from crosses cannot ever be considered Icelandic chickens.

A flock of Icelandics is a visual kaleidoscope, showing every feather color and pattern, both single and rose comb styles, and various shank colors. Some birds, both hens and cocks, sport crests of feathers on the head, while others do not. However, true Icelandics will not show any feathering on the leg, nor a “muff” or “beard” or ear tufts. Face patches range from white to a light lemon-yellow but are never red. They have red wattes and combs. They have a short, broad beak and orange, yellow-brown, or yellow green eyes. Hens may have small spurs; roosters spurs are long and upturned. Icelandics are on the smaller side, with mature males weighing 4.5 to 5.25 lbs. and hens 3 to 3.5 lbs.

Though egg production of about 180 eggs a year doesn’t match that of egg-laying champs such as Leghorns, Minorcas, and Rhode Island Reds, it’s good for a feed-thrifty laying flock, and hens maintain production in winter. Eggs are white to cream and small to medium – though surprisingly large for such small hens, averaging just below 1.75 ounces. An interesting homestead trait is retention of “broodiness,” the instinct to incubate a clutch of eggs and nurture the growing chicks. Not all Icelandic hens in a flock will “go broody,” but enough will to furnish all replacement chicks needed.

Carcass size of cull birds is small, not surprising for a type developed as Icelandics were to forage for most of their own feed. However, the flesh is fine-grained and remarkably flavorful; and old cull birds are excellent for stewing.

They are a lively and curious breed, and if handled when young, they become friendly. They can fly and like to perch in trees. This breed has much to offer as a more self-sufficient homestead flock. While not suitable for confinement, if given range to roam – whether on pasture or in woods – they are highly skilled at both foraging much of their own feed and evading predators. Piles of decomposing vegetation and other organic refuse are also popular places to forage, with a payoff of free natural feeds for the flock and compost for the garden. In their native land, they are also called Haughænsni or “pile chickens” because of their preference for such debris heaps. They are a good breed for beginners and are OK with children.

Icelandics are still relatively unknown in the U.S. and aren’t yet offered by commercial hatcheries. A Facebook group dedicated to the conservation of pure Icelandics may be the best place to find sources of hatching eggs, chicks, or started birds. Due to their rarity, these birds should not be crossed but kept as a pure breed.