In 1934, white eggs brought premium prices at market due to the belief that white eggs had a finer, more delicate flavor. At the time, most of America’s eggs were produced on small farms across the country and small farmers preferred dual-purpose chickens as they provide both a source of meat and eggs.

Since dual-purpose chicken breeds tend to lay brown eggs and white egg-laying breeds available at the time were light-weight and not well fleshed, Rutgers Breeding Farms decided to produce a dual-purpose breed that would lay white eggs – resulting in the Holland. 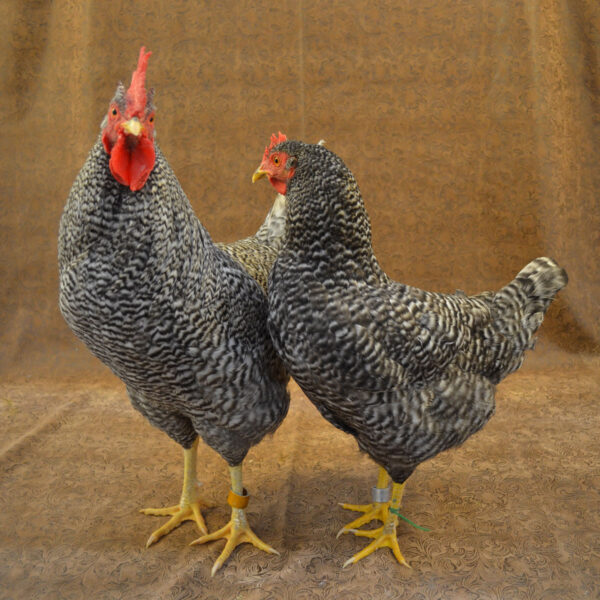 You may wonder why an American breed of chicken is called “Holland.” The answer lies in the ancestry of the breed. Breeders began with light-weight stock originally imported from Holland and mated it with White Leghorn, Rhode Island Red, New Hampshire, and Lamona, and through careful selection, created the White Holland. The Barred Holland was created by mating White Leghorn, Barred Plymouth Rock, Australorp, and Brown Leghorn. The breed was admitted to the American Poultry Association Standard of Perfection in 1949.

When they were created, the Barred Holland was much more popular with the farmers than the White Holland, possibly because of the popularity of the Barred Plymouth Rock – or it may have been for the practical reason that a chicken with a pattern is less likely to suffer predation than a white chicken. Unfortunately, the less-popular White Holland may now be extinct. While Hollands have never enjoyed widespread popularity even though it’s an excellent choice for homesteaders or on small acreages.

Holland chickens have yellow skin and legs, so will produce a carcass with the skin color most Americans favor. Their single comb with well-defined points, face, wattles, and earlobes are bright red. They have pale yellow beaks.

They are fairly cold-tolerant, though during periods of extreme cold, males may suffer some frostbite to their single combs. Hens produce about 200-240 medium-large eggs a year. The hens can become broody and will sometimes raise their own offspring. Hollands tend to have a slow to moderate growth rate, but this must be weighed against their ability to forage for a significant portion of their own food.

Hollands have earned a good reputation as being ideally suited for farm conditions. They’re good foragers with calm temperaments. This is a low-maintenance, healthy breed; they have cheerful personalities and enjoy interacting with humans, so they are a good choice as pets and for children. They are a healthy breed, and they are not noisy, so they make good backyard chickens even though they do not care for being confined.

If you decide to get Holland chickens, you can enjoy the fact that you are helping to conserve what is likely the rarest living breed of American chicken.