Hog Island is a barrier island off the coast of Virginia. Historically, small populations of people and livestock have inhabited Hog Island for hundreds of years. In the 1700’s, a flock of sheep was established on the island using locally available sheep of British origin. The sheep of Hog Island evolved in response to the island’s natural selection for hardiness, foraging ability, and reproductive efficiency. Some introduction of outside blood occurred, but the isolation and natural selection of the habitat has shaped the population into a distinct breed. The sheep numbered in the hundreds on the island at their peak in the early 20th century. 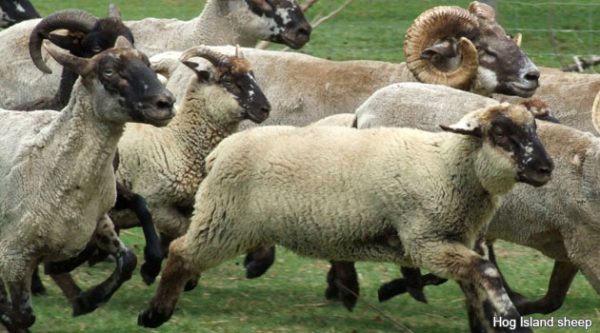 In the 1930s, a string of hurricanes and nor’easters washed across the island and discouraged residents from continuing life in their island community. By 1945, all Hog Island residents had migrated to the Eastern Shore of Virginia and had taken most of their livestock with them. Many sheep remained on the island and continued to thrive as they had for centuries. The annual shearing and notching in the spring was generally the only contact between the owners and their sheep. The sheep roamed freely upon their “floating” pasture consuming the marsh grass at will and imbibing fresh water from small pools that had been dug ankle-deep into the sandy soil.

The last sheep were removed from Hog Island in 1974 when the Nature Conservancy purchased the island. Four years later, Virginia Coast Reserve agents found, to their surprise, a thriving flock of sheep on the island. This is a testament to the extreme hardiness of these animals. The Nature Conservancy removed the last of the sheep in late August 1978, to return them to full domestication. Ten rams and twenty ewes traveled to Virginia Tech for research into the breed’s parasite resistance. The year-long study indicated that isolation, not resistance, had kept the sheep virtually parasite-free on the island.

Following their stay at the University, the remnant flock found a new home at George Washington’s Birthplace National Monument. While private breeders hold some flocks, many Hog Island sheep remain part of the heritage landscapes of living history museums, including Plymouth Plantation, the Museum of American Frontier Culture, Mount Vernon Estate and Gardens, George Mason’s Gunston Hall, George Washington’s Birthplace, and the National Colonial Farm. This is quite fitting considering they descend from and resemble historic sheep that existed in the New World during and after the colonial period.

Hog Island sheep vary in physical appearance. Most of the sheep are white wooled, though about twenty percent are black. Newborn lambs are frequently spotted over the body, but the spots usually disappear as the lambs mature. The face and legs of these sheep can be speckled brown, white, and black, or have black faces and legs. Wool from this breed is of medium weight with fleece yields ranging from two to eight pounds. The sheep will naturally shed their wool slowly each year, but most owners choose to shear them in order to collect wool and create a more even-looking coat on their sheep.

Ewes may be horned or polled. Rams can have horns or are somewhat polled, with only small scurs on their heads in the place of horns. Mature animals weigh between 90 to 150 pounds. The ewes make excellent mothers and most often give birth to twins. Hog Island sheep are excellent foragers and prefer to browse rather than graze, if given the opportunity to do so. They stay in very tight flocks and are extremely alert in nature.