Herefords are a medium-size hog that’s unique to the United States. It was developed in Iowa and Nebraska during the 1920s from Duroc, Chester White, and Poland China bloodlines. Additional breeding and selection led to the identification of 100 animals as foundation stock in 1934, and the National Hereford Hog Record was formed the same year to promote the new breed. Within the first decade of its history, the association attracted 450 members. Most of the interest in the Hereford breed was found in Illinois, Iowa, and Indiana. 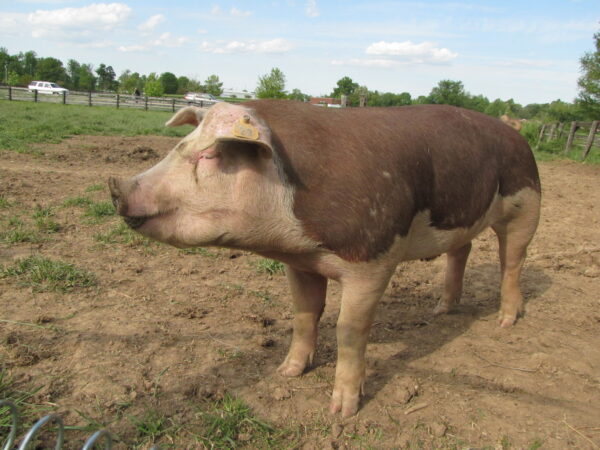 The Hereford’s name was inspired by its strikingly beautiful color pattern of intense red with white trim, the same as that of Hereford cattle. The breed description calls for hogs to be primarily red, with a white face and two or more white feet. The shade of red can vary, though deep red is preferred. Hereford cattlemen were so keen on the new breed of swine that the Polled Hereford Cattle Registry Association sponsored the formation of the National Hereford Hog Record.

Herefords are adaptable and thrive both in outdoor operations and under confinement systems. They also do well in a wide variety of climates. The hogs are known for their quiet and docile dispositions, making them an excellent choice for young people. The breed is appropriate for 4-H projects because it combines market conformation with a strikingly attractive appearance.

Breeders have emphasized early maturation, and Hereford hogs weigh 200 to 250 pounds by five to six months old. Herefords are easy to pasture but also grain efficient, reaching market weight on less feed than many other breeds. Mature boars weigh about 800 pounds and mature sows about 600 pounds. The sows produce and wean large litters. They make excellent mothers, closely attentive to their bright red and white piglets.

The Hereford began to decline in numbers during the 1960s with the shift away from the commercial use of purebred hogs and toward a three way cross of the Duroc, Hampshire, and Yorkshire breeds. Today, the breed population is estimated at fewer than 2,000 pigs in the United States, most of them found in the upper Midwest and Plains states. The characteristics of the Hereford, however, make it a natural choice for a variety of small-scale production systems. If the breed is given the opportunity under such systems, it will be able to earn its place in the future.