Hamburg-type chickens were found in Holland by the 14th century, but it is uncertain when they first arrived there. Although they have a German name, some experts believe Hamburgs to be an old breed from the Mediterranean area, possibly Turkey. The Dutch developed what is now known as the Silver Penciled and the Golden Penciled Hamburgs. Sometime prior to 1785 Penciled Hamburgs made their way to England. 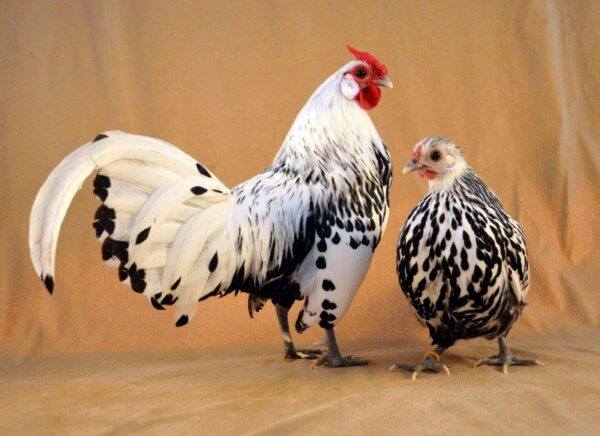 Legend has it that the first chicken show was a contest to settle the dispute of whose rooster was most magnificent. It was conducted in a pub in England around 1800 with the bartender acting as judge, a copper pot as the prize, and the competing roosters Hamburgs. One can well imagine the pride of each exhibitor.

The breed was first called the Hamburg chicken in the early 1840s, and some writers document the fact that the best birds came from Holland and Hamburg. Early in the breed’s time in England, a popular (though incorrect) belief was that Hamburg chickens were a hybrid of common chickens and pheasants. It was known by many different names, including Pheasant Fowl, Pheasants, Yorkshire Pheasant, and Silver Pheasant-Fowl of Yorkshire.

The English enjoyed the breed and created the Black, the Silver Spangled, the Golden Spangled, and the White varieties. Hamburgs arrived in America prior to 1856 and were much desired for egg production. While all the varieties of Hamburg chickens were embraced in America, the White Hamburg, created but shunned in England, owes much to the attention of American breeders.

By 1890, with the advent of the Leghorn breed, the Hamburg began to fall out of favor as a utility bird and with poultry fanciers. Although there were reports of Hamburgs laying 200-250 eggs a year, they are a small bird that laid small eggs – though fanciers continued to value them for their beauty. Today, the breed is rare and the quality of the color varieties varies.

All six Standard varieties of Hamburg chickens were recognized by the American Poultry Association in their Standard of Perfection in 1874: Silver Penciled, Golden Penciled, Silver Spangled, Golden Spangled, Black, and White.

The Hamburg is a smallish ornamental and egg-producing breed; males weigh about 5 lbs. and females, 4 lbs. They have a bright red rose comb that tapers into a long spike on males, red wattles, white earlobes, dark horn beak, reddish-bay eyes, clean gray or blue-gray legs and feet (with white bottoms), and gray bones and skin.

Hens lay 120-225 (depending on the strain and their age) small-to-medium size white eggs per year. The breed’s true gift is not in number of eggs per year, but in continued laying of a large number of eggs over several years. Pullets begin to lay at about 4-5 months of age; though the young can be a bit delicate until this age, once mature, Hamburg chickens are quite robust. They do not become broody, so you will need a broody hen if you want to hatch eggs.

They are an attractive addition to a flock, and the Silver Spangled color is not found in any other breed. As the roosters of all color varieties mature, they develop the full, sweeping tail and arched sickle feathers, and they are most popular as exhibition birds. They are not a good choice if you want a pet to cuddle, or for children.

The nature of the breed is one of great activity and alertness, and they are sometimes considered flighty, so they are more of a “look but don’t touch” breed. However, their “nervous” personality is a benefit in helping them evade predators. They are fast little birds, and early handling is important if you want to be able to treat any medical needs that arise.

They like to roam and forage, they can tend to be noisy, and the roosters can be a bit aggressive, so it’s best they are not kept in a mixed flock. They can fly, and Hamburg hens were known to prefer nesting in hedgerows and had the habit of roosting very high in trees. They do not like confinement. They can do well in both warm and cold climates.

The Silver Spangled is the most popular and easiest to find. Quality varies from strain to strain and color to color, so be careful in your choice of a source if you want to add this attractive and active breed to your flock.