The Hackney had its origins among the native horses of eastern England, including the Norfolk Trotter and Yorkshire Roadster from Norfolk, Yorkshire, Lincolnshire, and East Anglia. The introduction of Thoroughbred to this genetic base in the late 1700s gave rise to the Hackney breed. Roadsters of this time period were expected to have stamina as well as speed. Tom Ryder, who wrote a history of the breed, states that long-distance trotting was the horses’ strength. For example, Wroot’s Pretender, one of the best known of the early Hackneys, once won a match race of seventeen miles by trotting it in less than one hour. Races of 100 miles were not unheard of, and Hackneys could cover these distances in less than ten hours. 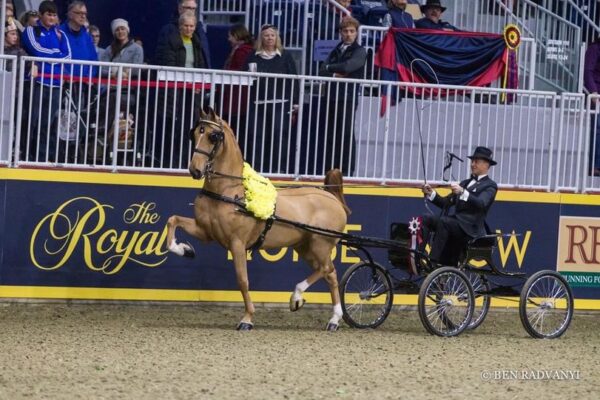 Hackney Horse with Cart and Rider

A breed society to promote the roadster was established in the 1880s, and Hackney was chosen as the breed name. Hackneys were in great demand throughout the 1800s, being valued as alert, hardy horses that possessed both speed and style. The invention of the railroad, however, changed the use of horses significantly. Driving distances became much shorter, and selection for style was emphasized over stamina. The result was carriage horses of lighter type and higher action, similar to the pleasure and show types of today. The Hackney retains athletic versatility, however, and the breed can excel in a variety of driving sports. It’s also a useful riding horse and often makes a good jumper.

Hackney horses stand 15 to 16 hands (60-64″) at the withers. The body is compact and muscular, with a broad chest and sloping shoulder. The legs are of medium length with large, strong joints, and the feet are durable. The hallmark of the breed is its fluid shoulder action and long, reaching stride. Breed colors are primarily bay, brown, chestnut, and black, with or without white markings.

The Hackney breed is uncommon worldwide, with a global population of around 3,000. The majority of which are found in Britain, with fewer than 200 Hackneys in North America and about 300 in Argentina. The breed type varies from place to place and strain to strain. Most strains have had recent introductions of Thoroughbred blood, and the British studbook allows a limited amount of this crossing. Relatively few strains retain the pure genetics of the historic Hackney breed, and these are a conservation priority.

The Hackney horse is related to but distinct from the Hackney pony, which was established in the 1870s through crossing of Hackney horses with Welsh, Fell, and other pony breeds. The pony breed is especially popular in North America, where it’s numerous and not in need of conservation.