The Gotland is native to the island of Gotland in Sweden, where ponies of this type have been documented as far back as the Stone Age. Also known as Russ or Skogruss (meaning “little horse of the woods”), the Gotland is a primitive breed, having been shaped partially by natural selection. 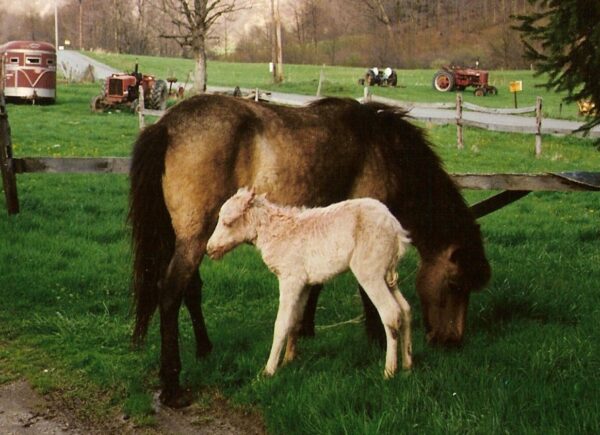 The breed’s history is connected with the Goths, who inhabited Gotland about 1800 BCE. The Goths used Gotland horses for draft, driving, and transport, and when they migrated into Europe about 200 BCE, Gotland horses pulled their chariots. The Goths eventually traveled into Germany, across the Danube, and into Italy, where they sacked Rome in 410 CE. The value of Gotland horses to the Goths is recorded in sculpture and in runic inscriptions, but the genetic impact of the breed may also be seen in several European breeds.

Gotland horses remaining on Gotland continued to be used in agriculture and transportation, running loose on the range when they were not needed. During the late 1800s, intensive development of the island led to a shift towards larger horses for heavier work. The market for Gotlands declined, and the range available to free-roaming herds was reduced. By 1900, fewer than 200 remained. The Gotland Agricultural Society took an interest in the breed, fencing its range on the island and encouraging pure breeding on the Swedish mainland. The breed has seen a revival in the last few decades and now ranges from 6,000 to 8,000 globally, with most of the population found in Sweden.

The Gotland is light and elegant in conformation. The breed has pronounced withers, a long back, and a sloping croup. The chest is deep and the shoulders long and sloping. The legs are strong and the feet are strong and hard. Gotlands stand 11.2 to 13 hands at the withers. Dun and bay predominate in the breed, but all colors are allowed except albinos, roans, and piebalds. Characteristics of the breed are a gentle disposition and lively intelligence. Gotlands are athletic, making excellent trotters and jumpers. Though strong enough to carry adults, they are primarily used for driving and as children’s mounts.

Gotlands were first imported into the United States in the 1950s for use in handicapped riding programs. A registry was formed in the 1960s, and over 500 animals have been registered in the past thirty years. The breed almost became extinct in North America during the 1980s. The Livestock Conservancy and a small number of breeders have worked to encourage a revival of the Gotland breed and over one hundred purebred Gotlands can be found in the U.S. today, with the population continuing to increase.