The Gloucestershire Old Spots is a historic pig breed known for its distinctive white coat with black spots. The breed was developed during the 1800s in the Berkley Vale of Gloucestershire, England. Its exact origins aren’t known, though it’s likely based on two breeds – the original Gloucestershire pig which was large, off-white, had wattles, and was without spots, as well as the unimproved Berkshire. Both of these breeds are now extinct. 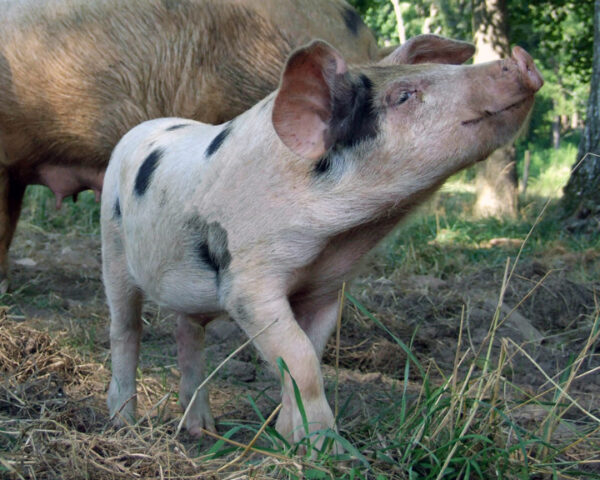 Gloucestershire pigs (pronounced Gloster-sheer) were selected as excellent foragers and grazers. They’re thrifty, able to make a living from pasture and agricultural by-products, such as whey from cheese making, windfall apples in orchards, and the residue from pressing cider. These easy-keeping qualities gave Old Spots the nicknames “cottage pig” and “orchard pig.” British folklore claims the large black spots are bruises caused by apples falling onto them as they foraged the orchard floors for food.

In 1913, the British Board of Agriculture announced a livestock development scheme that included the licensing of breeding boars. Farmers of the Berkley Vale realized this plan threatened the very existence of their beloved local pig breed. Subsequently, the Gloucestershire Old Spots Breed Society was formed in November of 1913 placing the breed among the oldest spotted pedigreed pig breeds known.

The breed hit a high point in popularity in Great Britain just after World War 1 when the naturally large proportions of lean meat from Old Spots was perfectly suited for the production of lean, streaky bacon. Which was quickly becoming popular in Great Britain at this time. Old Spots reigned supreme as the pork of choice for discerning palates and in livestock shows through the 1920s and early 1930s. The breed became rare after World War II when the shift to intensive pig production reduced interest in pigs that thrived outdoors. The remaining population became nearly extinct in the 1960s, though it has slowly increased since then.

Gloucestershire Old Spots were imported to the United States during the 1900s and have made genetic contributions to several American breeds, especially the American Spot and the Chester White. The breed never became popular in the U.S though and was practically extinct by the 1990s. In 1995, Kelmscott Farm Foundation of Lincolnville, Maine, organized an importation of twenty Gloucestershire piglets to reestablish the purebred population in America. A breed society was founded, and the number of animals is increasing. As of 2009, there are about less than 1000 Gloucestershire Old Spots in Great Britain and fewer than 200 breeding animals in the US. The breed notably benefits from the continued support of the British Royal Family, who favors pork from these pigs for their table.

The Gloucestershire Old Spots pig is known for its docility, intelligence, and prolificacy. Boars reach a mature weight of 600 pounds (136 kg) and sows 500 pounds (125 kg). The pigs are white with clearly defined black (not blue) spots. There must be at least one spot on the body to be accepted in the registry. The breed’s maternal skills make it able to raise large litters of piglets on pasture. Its disposition and self-sufficiency should make it attractive for farmers raising pasture pigs and those who want to add pigs to diversified operations.