The Florida Cracker is one of the oldest sheep breeds in North America. It’s believed that they developed from sheep that the Spanish first brought to the southeastern United States in the 1500s. The sheep developed largely through natural selection under humid, semitropical range conditions in Florida.

Prior to the end of open range in 1949, they were allowed to free-range in the pastures, palmettos, and pineywoods. Twice a year, they were rounded up for shearing and to mark lambs. In the middle of the last century, emphasis on high-input agriculture caused the sheep industry to turn to breeds of sheep, which were larger in size and produced more wool and meat. This caused Florida Cracker numbers to decline dramatically, endangering its very existence. Now, with renewed interest in low-input, sustainable agriculture, interest in Florida Cracker sheep is increasing once again. 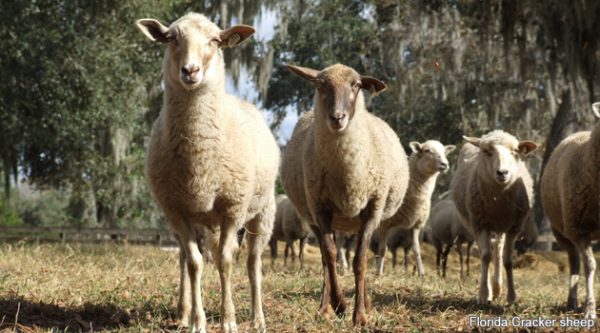 Florida Cracker sheep are both active and vigorous without any tendency to be wild. They demonstrate greater resistance to internal parasites than wool sheep and most other hair sheep breeds. The ewes can breed back one month after lambing, and ewes can produce two lamb crops per year. Ewes usually bear twins, with some singles, frequent triplets, and occasional quadruplets; lambing rates vary from 150 to 200%.

Ewes can weigh 100 pounds while rams reach weights of 150 pounds. The size of the sheep depends primarily on how well it’s fed. The sheep are able to handle harsh conditions and low-grade forages. With their strong parasite resistance, high lamb survivability, heat tolerance, excellent mothering instincts, and good flocking, the Florida Cracker has much to offer shepherds in the U.S.