The Faverolles chicken breed takes its name from the village of Faverolles, located in the Eure-et-Loire region just southwest of Paris, France. The breed was developed by crossing many chicken breeds, including the Houdan, Brahma, French Rennes, Flemish Cuckoo, Malines, and Dorking, then selecting offspring specifically for production qualities.

For many years, Faverolles chickens were variable in look, but by about 1886 a distinct type with consistency of feathering emerged. During the 1900s it was considered the best French breed yet produced. The breed was introduced to England in 1894. Dr. A.H. Phelps of Glen Falls, NY, imported Faverolles to America in 1901/1902 where the breed developed an enthusiastic following. 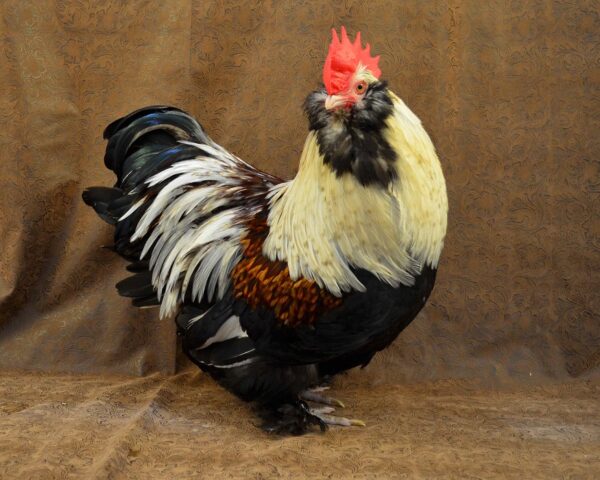 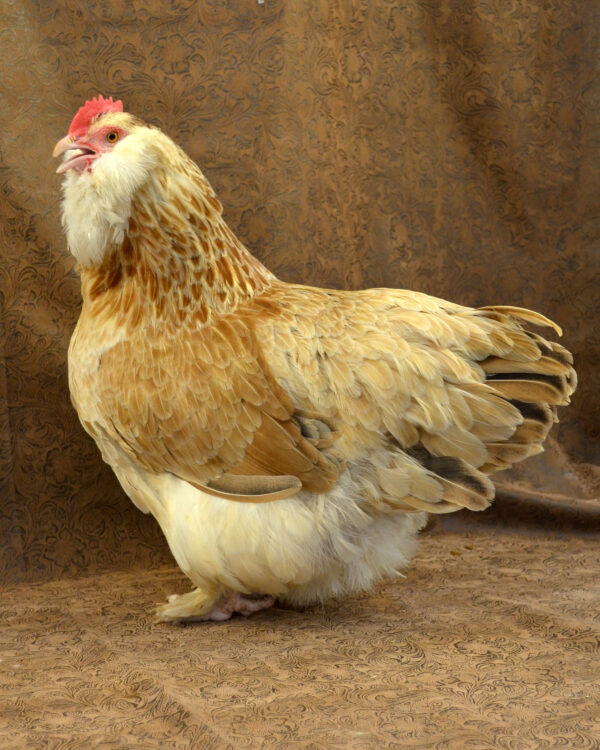 Faverolles come in many color varieties, but in America only the Salmon and the White varieties are accepted by the APA. The White variety was developed and refined about 1905, but when most people think of Faverolles, they mean the Salmon variety. Salmon is a unique color pattern found exclusively on the Faverolles chicken. The males appear as a much lighter colored Golden Duckwing compared to males of other breeds, and the females as a much more lightly colored Wheaten than females of other breeds.

Faverolles chickens were recognized as a standard breed in the American Poultry Association Standard of Perfection in two varieties, Salmon in 1914 and White in 1981,

These chickens are medium-sized, with deep compact bodies, beards, and pinkish-white feathered shanks and toes. They have five toes on each foot, and a red single comb. Their eyes are reddish bay, and they have a horn (Salmon) or white beak (White). With their “fluffy” appearance, it is easy to overlook the fact that they were developed for meat and winter egg-laying production for the great Paris market. Faverolles chickens combine early maturity, hardiness, and great egg-laying with fine flesh qualities.

Faverolles hens usually lay tinted eggs (though colors of light brown to pink tint are not unknown) and some lines are excellent sitters and mothers. Hens have been known to lay from 150 to over 200 eggs per year. The breed produces fine broilers and roasters. Males weigh 8 lbs and Females weigh 6.5 lbs.

As this breed is energetic, adaptable and curious and gets along with people of all ages, so they are good as a family breed and for a beginning chicken owner. They like to roam and forage but can also do well in confinement. They are alert and will loudly warn the approach of strange animals.

Characteristics:
Very productive when in contact with the ground