Note:
Were kept by Charles Darwin; No standard

Dutch Hookbill ducks are a unique and very old poultry breed thought to have originated in the Netherlands’ Noord-Holland province between the 17th and 18th centuries. The “Hook-bill’d Duck” was described and illustrated in Ornithologiæ libri tres written by Francis Willughby and published in 1676. As the name implies, the breed features a downward curving beak that sets it apart from other duck breeds. It is believed this trait was useful to duck breeders by making it easier for hunters to distinguish the domesticated Hookbill from wild ducks that inhabited the same land. In Holland, these ducks were managed in the waterways and canals of the countryside and were expected to forage for most of their food. Today, they are still among the best foragers of domestic ducks. 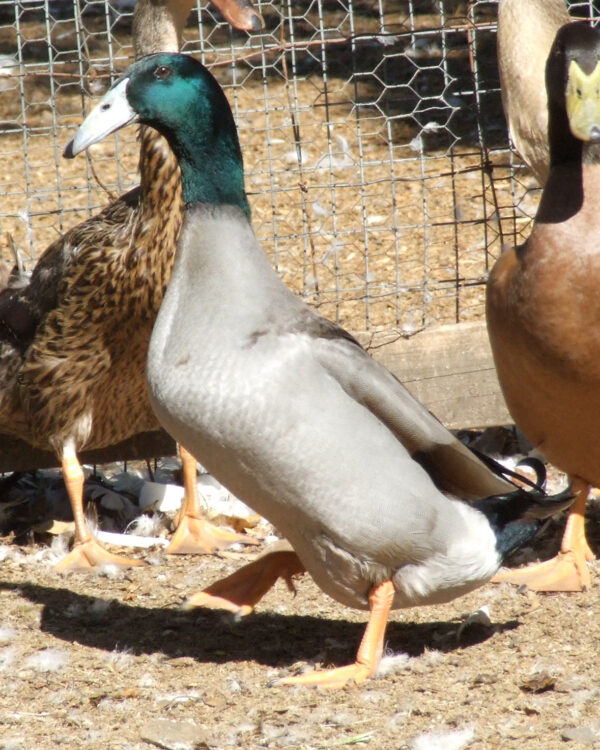 According to the Dutch Association of Breeders of Domesticated Waterfowl, “Nederlandse Vereniging van fokkers van gedomesticeerd watervogels”, Hookbill ducks and the Noord-Holland White Breasted duck, also known as the Witborst duck, had similar genealogies. Their exact origins have never been determined, but it is speculated that they were developed from early importations of Indian Runner ducks. This idea is supported by J. Bonenkamp in the magazine Avicultura (August 1990) where he recounts finding pure Hookbills among groups of ducks in East India.

The unique appearance of the breed made them desirable as ornamental birds, but they were soon recognized as excellent egg layers. That, combined with their remarkable foraging capability, made the breed widely popular on Dutch farms. In 18th century Holland, ducks were provided a place to nest and feed while they were brooding. Then ducks and ducklings were sent out to the surrounding wetlands to forage for their food and received no supplemental food. Ducklings also had their wings clipped to make them easier to catch later. By mid-August, the birds were gathered and sent to market in Purmerend where they were purchased by duck keepers to use for egg production. The birds kept for breeding were sturdy and disease resistant, self-sufficient, adaptable to new circumstances, and efficient layers that needed less food than other breeds to be productive.

The breed declined in the 20th century due to a diminished market for duck eggs and the effect of the increasingly polluted waterways that served as their home. By 1980, the Hookbill was nearly extinct, but through a Dutch effort led by Hans van de Zaan, the last 15 birds were collected and used to start a conservation breeding program in the Netherlands. The Dutch Hookbill is one of the rarest duck breeds in the world.

Dave Holderread was among the first to import the Dutch Hookbill into the US in 2000. He found that there were three bill types in the population: extreme curve, moderate curve, and straight. In his book Storey’s Guide to Raising Ducks (2011), Holderread felt that the most effective breeding strategy was to cross birds with moderately curved beaks to each other or an extremely curved beaked bird with a straight beaked bird. He found that crosses between birds with extremely curved beaks had poor egg fertility. There are still very few primary breeding flocks of Dutch Hookbills in the US.

They come in three primary color variations: dusky, white, and white-bibbed dusky. Other colors exist but not in great numbers here in the states. Dutch Hookbill ducks have excellent flight capability, especially younger individuals. The birds reach sexual maturity very quickly, by around 16 weeks of age. Healthy ducks can be expected to lay anywhere from 100-225+ blue, green, or white eggs per year.

They are curious and like to see what is going on around them but require socialization when young to enjoy interacting with people and other animals when they are mature. The females make a loud honk while the males are quieter and raspier which makes them easier to tell apart.

The Hookbill is a remarkable breed that deserves a second look as a viable and efficient egg producer for small-scale farming.

To learn more about the Hookbill duck, download this paper from Jonathan M. Thompson about the origin and history of the breed.