The Dorset is an ancient breed likely developed from white-faced, horned, short wooled sheep that thrived in the sheltered valleys and lush hill pastures of southwestern England. Today, the Dorset is globally distributed and found in two varieties, Horned and Polled. The Dorset Horn, or Horned Dorset, is of conservation interest. 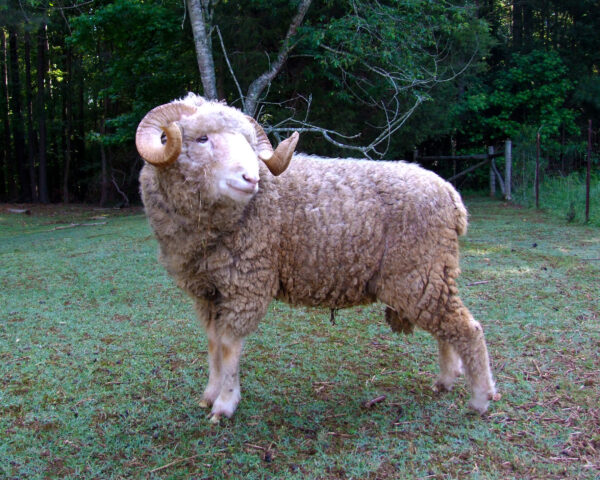 Dorsets are white sheep with open faces and long bodies. Ewes weigh 150 to 200 pounds, and rams weigh 225 to 275 pounds. The sheep are avid grazers and use feed well. Ewes are heavy milkers, easily able to raise their own lambs. They have also been used in dairying. Dorset sheep produce between five and nine pounds of medium-grade wool per year. In the Horn variety, both ewes and rams carry horns. Ewes’ horns are light, curving forward neatly; rams’ horns are heavy and spiral out as well as curving forward.

The single most important attribute of the Dorset is its extended breeding season, also called nonseasonal or aseasonal breeding. This characteristic, not found in any other British breed, is an important performance trait. Sheep of most breeds are seasonal breeders, mating in the fall and producing lambs in the spring. In contrast, Dorsets can be bred in the spring for the production of lambs in the fall. Some ewes will raise two sets of lambs a year, with multiple births not uncommon. Dorsets tolerate heat well, and heat tolerance contributes to Dorset rams’ ability to breed earlier in the season than rams of other breeds.

Dorset Horn sheep were imported into the United States about 1860, though the breed didn’t appear in large numbers until the 1880s. The Continental Dorset Club was organized in 1890. In the early 1950s, a genetic mutation causing polledness occurred in the flock at North Carolina State University. The Polled Dorset variety was developed there. (Polled Dorsets were also developed in Australia earlier in the 1900s, though they originated from the introduction of Corriedale and Ryeland blood into the Dorset Horn.)

The Continental Dorset Club registered the first Polled Dorsets in 1956, and they have been included in the same flock book with Dorset Horns. The success of the polled variety has caused the Dorset to become the second most popular sheep breed in the United States. Polled Dorset sheep have almost completely eclipsed Dorset Horns, and the latter is experiencing a precipitous drop in registrations. The Polled Dorset and Dorset Horn have diverged somewhat over the past 40 years. Though differences between the populations have not been documented, anecdotal evidence suggests that the intensive selection of Polled Dorsets for early maturation and rapid growth rate may have been made at the expense of selection for nonseasonal breeding, which has declined as a result. Given the possible impact of these changes and the long divergence of American Dorset Horn sheep from other Dorset populations, the Dorset Horn has been included as a conservation priority.